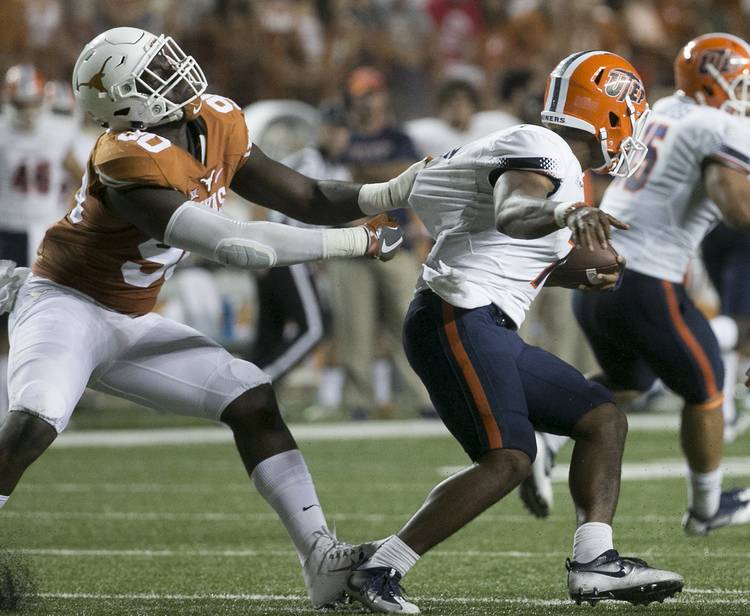 The Longhorns’ 41-7 win hardly was a step back

Through two games, Texas looks legit. And No. 9 Georgia barely beat Nicholls, 26-24. So we’ll see if the Longhorns might end up in the Top 10 when the AP’s Top 25 poll comes out Sunday.

Why Texas (2-0) won: Missing six starters, the Longhorns plugged in backups, reconfigured its offensive line, saw some new faces make big plays, and cruise-controlled past UTEP. For the second straight week, Shane Buechele did not disappoint. After a solid Week 1 performance (16-26-280, 2/1), he was 22 of 27 for 244 yards with four touchdowns and no interceptions against the Miners. Even without D’Onta Foreman, the running game looked fine. And the defense gave up one big play, but otherwise controlled things.

Why UTEP (1-1) lost: Because New Mexico State, which made Miners running back Aaron Jones the nation’s leading rusher after one game, is a far cry from Texas. Jones finished 125 yards off his Week 1 tally. Penalties were real killers. A 15-yard hands to the face gave Texas a first down at UTEP’s 29, and Shane Buechele threw a touchdown on the very next play. UTEP’s third possession of the day started at the 8 because of a Miners penalty on a kickoff.

Some of the game’s storylines heading into Saturday night, and how they played out:

1. How did the Longhorns look? Like the same team that beat Notre Dame? Like one that’s ranked as the 11th best team in the country?

We can use a couple of metrics.

Texas was a 30-point favorite. The Longhorns covered.

The crowd was expectedly off of last Sunday’s school-record crowd that energized DKR for a prime-time, everybody’s-watching win on national television. This crowd was announced at 92,863 — more than 9,000 off the 102,315 for Notre Dame. Still, it got loud when it needed.

Even when the Longhorns’ lead was cut to 10-7 in the first quarter, there weren’t any panic buttons being pushed. Remember, Texas settled for an early field goal even though the drive started at UTEP’s 6, and an early touchdown was wiped out by a fumble out of the end zone.

2. How did Texas rushing defense look? UTEP’s Aaron Jones led the nation in rushing after one game, having put up 249 yards last week vs. New Mexico State.

The Longhorns stuffed the run. They’ll get their pass defense tested next Saturday.

3. Shane Buechele and Tyrone Swoopes both looked solid against the Irish. How about tonight?

Buechele picked up right where he left off. Swoopes made his first appearance late in the first quarter, Texas starting a drive at UTEP’s own 6-yard line. But the 18-Wheeler package fell flat, and UT settled for a field goal. Swoopes’ role took a step back from the impact he made against the Irish.

4. Heading into the long road trip out West, where is this team at?

Winning this one in easy fashion, even though it was expected, is a good sign. Texas looks like it’s got its act together, but the big question out there has to do with injuries. The Longhorns were smart to rest their injured, but the offensive line sure could use Connor Williams and Kent Perkins back, and D’Onta Foreman will be needed. Dylan Haines is a love him/hate him safety, and Kevin Vaccaro looked good, but the secondary will need all the help it can get.

D’Onta Foreman also missed the game, apparently from a hamstring issue. Reports from the game, however, said he’d be good to go against Cal. Senior safety Dylan Haines (concussion) didn’t play. He was replaced by Kevin Vaccaro.

Freshman OLB Malcolm Roach recorded his first career sack and added a big hit on a receiver in the fourth quarter. Freshman safety Brandon Jones blocked a punt, setting up Texas’ second score. Freshman running back Kyle Porter got into the game midway through the second quarter. He finished with eight carries for 33 yards, including one 16-yarder. Collin Johnson made his first career catch. Devin Duvernay had an impressive downfield catch in the fourth quarter from Swoopes, but it was called back by offensive pass interference.

Texas improves to 2-0, the first time the Horns have done that since 2012. That team started 4-0 before dropping back-to-back games to West Virginia and Oklahoma. It was a 9-4 season that ended with the Alamo Bowl win over Oregon State.

First quarter: Texas 10, UTEP 0. Jerrod Heard’s first-ever touchdown catch helped the sophomore celebrate his 21st birthday, and Trent Domingue kicked his second field goal of the season. But it could have been worse; Jacorey Warrick spoiled a touchdown when he fumbled the ball out of the end zone for a turnover, and the Longhorns mustered only a field goal starting the drive at UTEP’s own 6. The 18-Wheeler package fell flat on that one.

Scoring plays — Texas: a 29-yard TD pass from Buechele to Heard; a 22-yard FG from Domingue.

Second quarter: Texas 20, UTEP 7 (halftime). Aaron Jones eventually cut into Texas’ lead with a 51-yard touchdown run. But that one run accounted for 44 percent of his first-half output. Domingue added his second field goal of the half and Warrick made up for the first-quarter fumble out of the end zone with a nice TD catch that was reviewed and upheld.

Scoring plays — Texas: a 43-yard FG from Domingue; an 8-yard TD pass from Buechele to Warrick. UTEP: a 51-yard TD run from Jones.

Third quarter: Texas 34, UTEP 7. Chris Warren III’s first touchdown of the season put Texas up by 20 points, and on that drive, it was Buechele, not Swoopes, who converted a fourth-and-1 with a run. Buechele hadn’t gone deep very often, but did connect on his first long one of the game with a long scoring pass to Dorian Leonard. UTEP dodged a bullet when a Jones fumble deep in Miners territory was called back after a review.

Fourth quarter: Texas 41, UTEP 7 (final). So THAT’S what it looks like to cover the spread. Buechele left the game with 5 minutes to play, and Swoopes swept it up.

The last five times Texas has started 2-0, and how those seasons ended up:

The takeaway: 2-0 starts, coupled with bowl wins, were the norm around here.

On deck for Texas: Cal, next Saturday at 9:30. It’ll be the first of three straight games played away from Royal-Memorial Stadium (at Cal, at Oklahoma State, vs. Oklahoma in Dallas).

WATCH: Jerrod Heard scores his 2nd TD on his birthday on throw from Shane Buechele