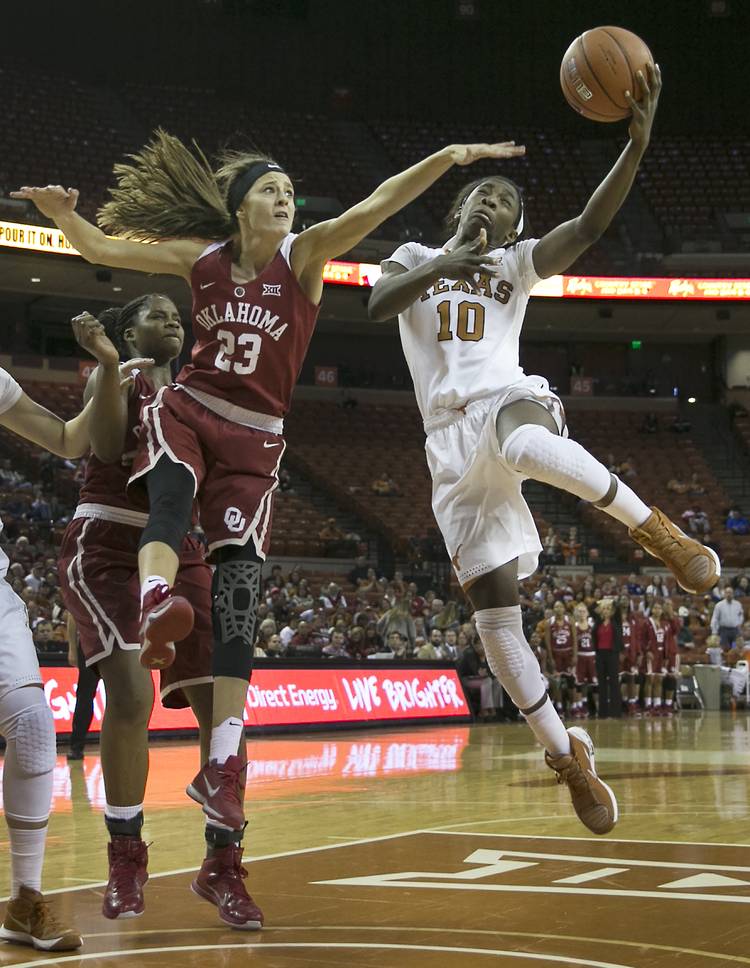 (USE THIS PHOTO LEAD) Texas' Lashann Higgs goes up for a basket during fourth quarter action in their win over OU 83-76 victory.--The Texas Longhorns played host to the Oklahoma Sooners in a Big 12 game at the Erwin Center in Austin, TX Saturday January 23, 2016. RALPH BARRERA/ AMERICAN-STATESMAN

Coach Brandon Schneider was 95-66 in five seasons at Stephen F. Austin before being hired by KU last spring. The Jayhawks are coming off a 74-46 loss to Oklahoma State Sunday in Lawrence…. Freshman Tyler Johnson scored a career-high 9 points in her third career start. Guard Aisia Robertson had 3 of Kansas’ season-high 11 steals…. Kansas has lost 10 straight games, a streak that started after a 61-54 overtime victory over Navy on Dec. 11…. Guards Lauren Aldridge, Kylee Kopatich and Timeka O’Neal have combined for 91 of the team’s 105 three-point shots.

Imani Boyette and Empress Davenport combined for 26 points and 18 rebounds in UT’s 75-38 victory over Kansas earlier this month in Lawrence…. Texas is coming off an 83-76 victory over Oklahoma Saturday with roughly 40 ex-players in attendance…. Boyette surpassed  the 900-­rebound milestone with 11 boards. She is the ninth player in team history to reach that plateau…. Freshman Lashann Higgs scored a Big 12 career-high 11 points on 5-of-9 shooting. Sophomore Ariel Atkins hit all 4 of her shots from the field and contributed 4 rebounds in 17 minutes.