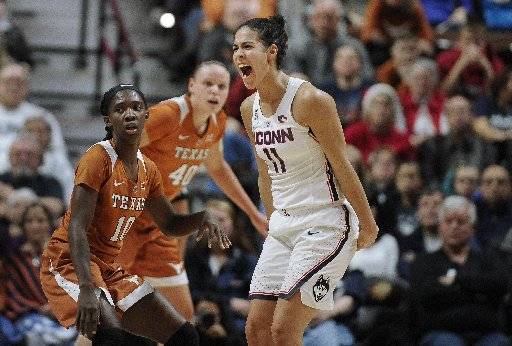 It seems that a different player steps up every game. It was Napheesa Collier’s turn on Sunday.

Collier scored 24 points and No. 2 UConn won its 82nd consecutive game with a 72-54 victory over No. 14 Texas in the annual Jimmy V Classic.

“It’s really hard to pinpoint or put a label on this team,” Auriemma said. “They just seem to do what they need to do. That’s what it appears to me right now. We don’t appear to be a team that imposes their will on the other team like we’ve been doing the last couple years. What do we have to do today? We figure it out and just do it.”

Kia Nurse added 15 points for the Huskies (7-0), who are in the midst of the second-longest winning streak in women’s basketball history, trailing only their 90-game run from 2008-10.
Next up is top-ranked Notre Dame.

“It’s going to be fun the next couple days preparing,” Auriemma said. “That’s still one of my favorite things to do, prepare for a really good team on the road. … Sometimes more fun than the actual game. I’m looking forward to seeing how as a team, what kind of look the players have these next two days. I think they’ll be pretty excited. It’s the first time in a while you’re going in and someone else is No. 1 in the country.”

UConn led by nine at the half before Texas (2-4) closed to 51-49 with 3:18 left in the third quarter on a 3-pointer by Brooke McCarty. The Huskies then scored the next 12 points, including the final six of the period to get some breathing room. Collier capped the burst with a nifty reverse layup off a rebound that made it 63-49.

Texas couldn’t get within single digits the rest of the way.

McCarty led the Longhorns with 15 points.

The Huskies trailed 17-15 after one quarter but took command in the second behind Nurse. She scored the first seven points of the quarter to give UConn a 22-17 advantage. Texas (2-4) got within 26-24 before the Huskies closed the half on a 13-6 spurt. Collier had the final seven points of that burst as UConn led 39-30 at the half.

Texas lost second-leading scorer Ariel Atkins in the first quarter when she was hit in the head inadvertently. She came in averaging 13.6 points and had just four in six minutes.

“We’re not sure yet,” Texas coach Karen Aston said of the extent of the injury. “That was obviously a difficult loss for us. … So I’m not sure of her status.”

JIMMY V
This is the sixth consecutive season that the Huskies have played in the game in honor of the former N.C. State men’s coach, who died of cancer. Uconn has won all six of those games. They are 8-2 overall in the game.

“As a coach you obviously have so much respect for the way he handled an unbelievably difficult situation,” Auriemma said. “I hope we get invited to play in it every year. We’d do it every year if we could.

TOUGH SCHEDULING
Both Texas and UConn have faced top opponents this season. The difference is the Longhorns have struggled, going 0-4 against Top 25 teams. They lost to Stanford, Mississippi State, South Carolina and UConn. The Huskies have beaten Florida State, Baylor, DePaul and Texas.

BIG PICTURE
Texas: The Longhorns didn’t lose their fourth game of the season until March last year. … McCarty moved into 10th place on the school’s all-time list of 3-point shooters. She has 117.
UConn: The two teams have played eight times, with the Huskies winning all the meetings, including in the last two NCAA Tournaments. … Former NFL great Donovan McNabb was at the game. He’s the uncle of Nurse. … This was the fourth year in a row that the Huskies have played a game at Mohegan Sun. The American Athletic Conference holds its tournament at the casino.

UP NEXT
Texas: After facing South Carolina and UConn back-to-back, the schedule doesn’t get much easier with Tennessee waiting on Dec. 11. The Longhorns do have an exam break before then.

UConn: A showdown awaits with top-ranked Notre Dame on Wednesday in South Bend, Indiana. It will be the third straight ranked opponent the Huskies have faced.

Report: Charlie Strong a candidate at the University of Cincinnati