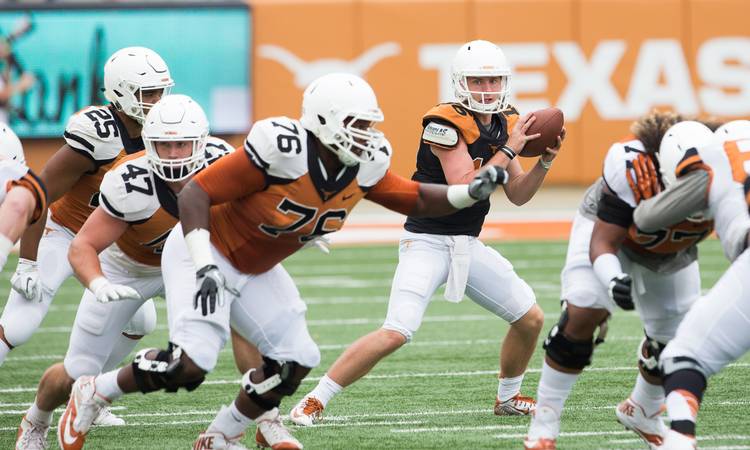 Shane Buechele showed a nice, deep touch with a 32-yard pass to Dorian Leonard on his first series. It was a sign of things to come — the freshman quarterback completed 22 of 41 passes for 299 yards and a pair of touchdowns, including a smooth 65-yard pass-and-catch score to John Burt.

Junior cornerback Antwuan Davis came up with a great takeaway when he outfought DeAndre McNeal for an interception on a deep throw to the end zone. It was one of two picks on the day for the defense.

Burt, the most dependable receiver Texas had last season, dropped what would’ve been a 30-yard completion from Tyrone Swoopes on the first series of the day.

We knew going in that there would be no kick or punt returns (per the coaching staff), but it still doesn’t explain why sophomore Ryan Newsome fielded a punt at his own 1-yard line. It’s one thing to catch it for practice, but it still wasn’t a good look if we’re talking fundamentals.

Shane Buechele got the offense on the scoreboard for the first time when he threw a perfectly-placed ball on the outside shoulder of wide receiver Armanti Foreman for a 27-yard touchdown, beating cornerback Holton Hill in the process.

Late in the second quarter, safety DeShon Elliott — who’s bidding for a starting spot — laid out Roderick Bernard with a vicious hit, causing a fumble.

Third and Longhorns: Was this game half-empty or half-full?