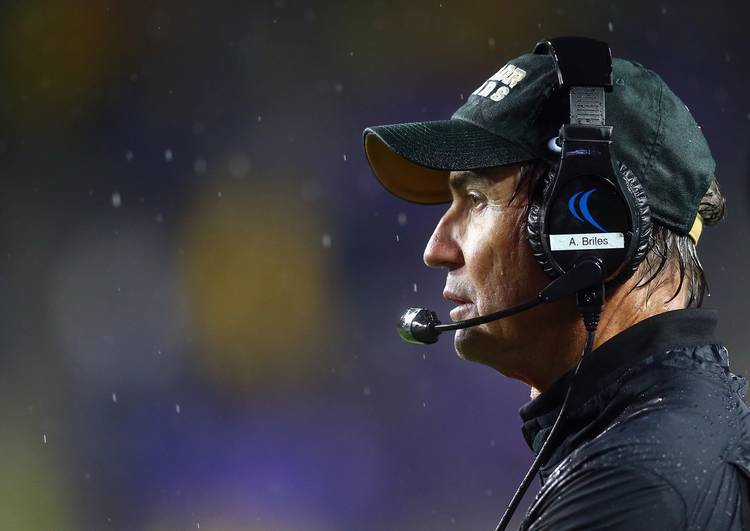 Head coach Art Briles of the Baylor Bears during the second half against the TCU Horned Frogs at Amon G. Carter Stadium on November 27, 2015 in Fort Worth, Texas. (Photo by Ronald Martinez/Getty Images)

In today’s Golden’s Nuggets, Cedric touches on a couple Bevo and Big 12 related items. Here’s what he had to say about them:

On Baylor bringing back Art Briles for 2017?

So there are Baylor donors out there who think they can sit Art Briles in the fridge for a year, then bring him back for the 2017 season to resume coaching the football team?

When asked about a possible Briles return, Texas Rangers co-owner Bob Simpson told the Dallas Morning News, “We don’t know yet. We’d like to see that.”

Then blind me, please. Blind us all. To bring Briles back would be catastrophic. The damage? Irreparable.

With Ken Starr and Ian McCaw out, the campus has no leadership in place outside of the embattled Board of Regents, who could have ended this nightmare weeks ago by just terminating Briles on the spot. Problem is, without a written report — which could have easily come from the Pepper Hamilton investigation — they can’t fire him for cause.

This rumbling of Briles support can either be chalked up to some insensitive fat pockets losing their way or simply financial posturing from Briles’ lawyers to get him a nice settlement.

Nothing can overshadow the reality that Briles and members of his staff put winning football games ahead of the safety of young women on that campus.

For now it has begun to settle in that the “terminate” in the “intent to terminate” wording hasn’t happened yet. This should be alarming to anyone who values common human decency over winning football games.

The rudderless ship is taking on more water. Bad look in Waco.

On Big 12 baseball and the coaches that might replace Augie:

Who said Big 12 baseball was dying? Did you notice that three of the eight schools in the College World Series hail from the conference of 10? And they did it with a round-robin and a conference tournament, haters.

Texas Tech, Oklahoma State and TCU all booked trips to baseball’s Elite Eight, which is the most schools from any conference. They’re also coached by men might consider to replace the departed Augie Garrido at Texas. Makes sense.

TCU’s 4-1 win over Texas A&M was notable, not only because TCU — the Big 12 upgrade from 2012 — just earned a third straight trip to Omaha under Jim Schlossnagle, but also because the mighty SEC took its lumps. Seven SEC schools hosted regionals, but Florida, which played Florida State on Monday night, was the SEC’s only CWS hope.

For the rest of Cedric’s Nuggets, including his takes on the NBA Finals and a longtime athletic director retiring, click here.

Jordan Spieth worried about too much sand in Oakmont bunkers