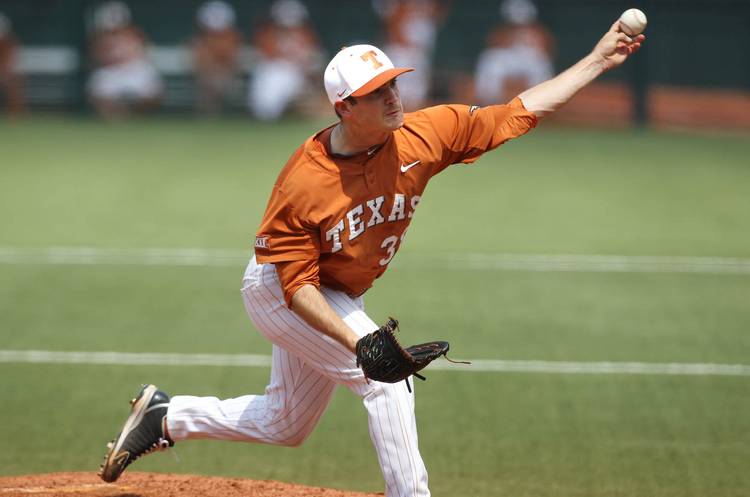 There were three wild pitches, two passed balls, four errors, 14 runs scored and oscillating rain. All of that suited Texas in the rubber match of its three-game series against Kansas.

Texas scored 12 runs to defeat the Jayhawks (14-20, 3-8 Big 12) by way of the run-rule 12-2 in seven innings at UFCU Disch-Falk Field. The Horns flooded the scoreboard while rain flooded the field and the stands.

“I wouldn’t say its our best series that we’ve played,” left fielder Travis Jones said. “I feel like that we’ve played really strong in a lot of other series, but the outcome just hasn’t turned out the way we wanted it to.”

While the Horns had only seven hits to Kansas’ eight, Texas walked 12 times and had a runner in scoring position in every inning except the second and the sixth.

Kansas starter Jackson Goddard allowed three runs in the one inning he pitched. Hayden Edwards replaced him in the second and allowed two runs in the third inning. The other two runs were unearned. The Jayhawks used five pitchers and four of them allowed runs.

“I got actually pretty lucky throughout the game,” Culbreth said. “I felt like every time they went to pitch,  the rain picked up a little bit, and every time I went out there, it kinda stopped.”

The game was called in the seventh inning — after Tyler Rand scored on a bases-loaded walk — because Texas was winning by 10 runs.

Jones walked to lead off the first inning. Kody Clemens, who finished 2 for 2 with two RBIs, bunted him to second. Tres Barerra walked. Kacy Clemens then skipped a single to right field to bring in Jones and give Texas a 1-0 lead. Goddard fired a wild pitch that brought in Barerra. Zane Gurwitz singled and a throwing error by third baseman Ryan Pidhaichuk brought in Clemens to give the Horns a 3-0 lead.

Kansas got a run back in the top of the second when TJ Martin grounded out to third and brought in Colby Wright, who had singled and moved to third when Devin Foyle doubled.

The bottom of the third was the craziest half-inning of the day. The Horns scored four runs, two of which came off wild pitches, another was scored on a passed ball to Tyler Rand, and the last one crossed the plate on Jones’ sacrifice bunt back to the pitcher. Texas led 7-1.

The Jayhawks scored a run in the top of the fourth, but Texas plated two more in the bottom of the fourth to increase its lead to 9-2. Jones punctuated the win with a two-run homer to left field in the fifth.

The Horns’ version of small ball worked Saturday. Texas constantly had leadoff hitters on base and were able to move them over either by bunts or walks.

“We didn’t find a way to interfere with the process,” coach Augie Garrido said. “If they were going to walk somebody, we took our walks. We played a very unselfish game.”

The Horns have won their last two series.

“I feel like things are kinda going our way,” Culbreth said. “What would have been foul balls are now turning into fair balls, diving catches are being made, just little things you kinda overlook are starting to go our way.”