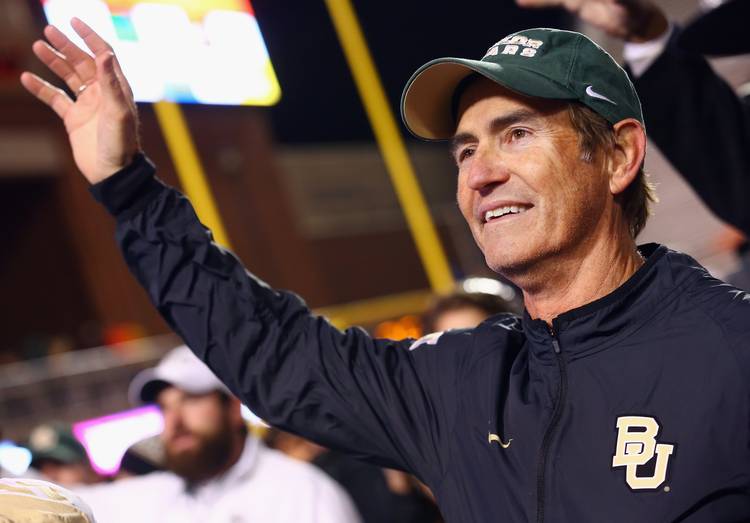 On Augie Garrido’s future at Texas:

“Augie Garrido is probably coaching his final games at Texas unless he pulls Miracle No. 2 out of his baseball cap this week. He should step down regardless because of the erosion in his program. But I’d rename the baseball facility Disch-Falk-Gustafson Stadium at Garrido Park. It’s a mouthful, but how do you slight any of the greatest baseball coaches in school history?”

On the Baylor sexual assualt scandal who should be fired:

“Baylor is still going at a snail’s pace in dealing with its sexual assault scandal, but it appears to no one’s surprise that university President Ken Starr is likely to be the fall guy, even though he might be the least responsible for this crisis. He just sets the tone and as such should be fired. Starr doesn’t recruit the athletes who have been charged with these heinous offenses and doesn’t monitor their behavior on a daily basis, but he also doesn’t inspire the chest-pumping dollars that Art Briles does as head football coach. We all know sports serves as the front porch of a university, but also a window to its soul and integrity. I like Briles as a person, but he and Baylor have been sorely misguided in their actions. The school’s lack of compassion for the victims has been unsettling. I don’t know what it’d take to make Baylor part ways with Briles, but it’s sad that the administration hasn’t taken him to task a bit. As much good as he’s done for the school, I’d let Briles go as well. I think most other schools would already have fired him.”

On Texas’ chances of winning a national title in track:

“Texas’ chances of capturing its first men’s national championship in track suffered a crippling blow when star hurdler Byron Robinson was suspended for the season for undisclosed reasons and will not compete in this week’s West Regional or the NCAA Championships. The Big 12 400-meter hurdles champion has the fastest time in the nation in his specialty and ran a leg on Texas’ 1,600 relay team. Coach Mario Sategna called it a setback for the eighth-ranked Longhorns but likes his depth in the relays and will plug in Carlton Anumnu or Chris Irvin of Westlake. “It’s go time,” Sategna said. “All hands on deck. We don’t rely on one guy.” The No. 6 women are gunning for their first NCAA title since 2006 behind sprinters Morolake Akinosun and Courtney Okolo, freshman triple jumper Asa Garcia and three pole vaulters.”

On what one UT tennis player heard while playing the Aggies in the NCAA tourney:

“(Texas No. 1 tennis player George) Goldhoff kidded about the raucous reception the Horns got from Aggies fans. Think the rivalry is wearing off, at least as far as the athletes? Goldhoff said: “They were yelling stuff and calling us tea sippers. I don’t know what that was about. And saying, ‘Beat the hell out of TU.’ Hey, we’re not Tulsa.”

For the rest of Kirk’s 9 Things including his thoughts on the Warriors/Thunder series, the safety of playing football and St. Edward’s baseball, click here.