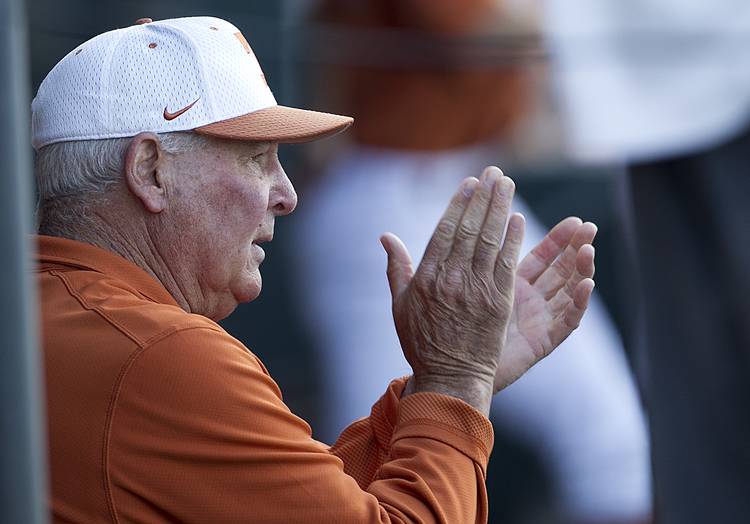 Augie Garrido , shown coaching from the dugout during a game against Kansas State at UFCU Disch-Falk Field, died Thursday morning in California at the age of 79. (ALBERTO MARTíNEZ / AMERICAN-STATESMAN)

Augie Garrido, the legendary Texas baseball coach whose dismissal was announced Monday, is the winningest coach in college baseball. Being the archduke of the dugout would be enough accomplishment for one man, but Garrido’s also a TV star.

“Home Plate with Augie Garrido,” a Longhorn Network cooking show, takes viewers on a tour of Austin’s restaurant scene, led by Garrido. If you’ve ever caught it on TV like I did at the Trudy’s bar after a wedding rehearsal one time, you’ve probably blinked and thought “… is this real?” You wouldn’t know it from a Google search, which yields limited results (and only a couple episodes, like this one featuring Rudy’s BBQ), but yes. Yes, “Home Plate” is real and delightful.

When asked in an American-Statesman interview earlier this year whether there were any episodes of the sporadic series planned, Garrido said, “We haven’t done any this year. We did four shows last year. They have an inventory now where I think they mix it up a little bit.”

Garrido will still be a UT employee, if not the school’s baseball coach, so who knows if “Home Plate” will live on. You can relive memories of Garrido’s trip to the Uncle Billy’s, no matter what happens. Watch it below.

“Rubbing pork butts is not a good thing.” Très Augie.