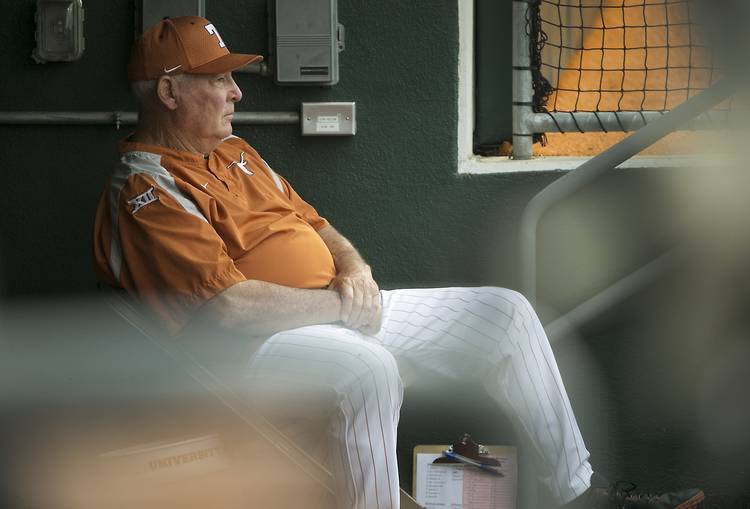 Texas head coach Augie Garrido is in his usual place in the corner of the dugout as the game gets under way against Lamar. The Texas Longhorn baseball team took on Lamar University in a non-conference game at UFCU Disch-Falk Field Tuesday night March 29, 2016. RALPH BARRERA/ AMERICAN-STATESMAN

In today’s Golden’s Nuggets, Cedric touches on a couple Bevo related items. Here’s what he had to say about them:

The current mode of operation hasn’t worked out very well.

This isn’t the golden era where coaches contacted Texas when a gig came open. It’s more about Texas contacting coaches. Texas isn’t the prettiest girl at the dance anymore, just one of several.

Things have taken an embarrassing turn. Here we are nearly one month removed from Augie leaving his post and the New York Yankees of college baseball are still without a coach.

To say the search has been bungled would be an understatement. This thing should have been done in quick order. Now we may not have predicted the fat raises given to coaches the school was interested in, but since when has money kept UT from getting the coach it desired? This school is the king of overspending, but it hasn’t added up to a new baseball boss; the latest ball was dropped with the departure of pitching coach Skip Johnson, one of the nation’s best, to Oklahoma.

This hasn’t been a feather in the cap of athletic director Mike Perrin. I guess it’s time for President Gregory L. Fenves to ride in on a white horse again (we’ve seen this before). Augie has remained silent during this whole saga, and the time has come for him to take on a more active, public role in the search for his replacement. He is still under salary, after all. Perrin and associate AD Arthur Johnson don’t bring the cache that any prospective baseball coach would respect.

Augie would, for many reasons. The man’s record speaks for itself. Is he a great job interviewer? Who cares? All that matters is that he get a guy in here with the same vision that led to a pair of national championships and a Hall of Fame career after replacing the legendary Cliff Gustafson.

The Kevin Durant free agency tour is set to begin. This is that time of the offseason when the most visible free agent makes all these headlines by visiting with teams in the market to make upgrades at his position. The Texas ex has set up visits with San Antonio, New York, Golden State, Miami, Boston, the Los Angeles Clippers and his own Oklahoma City Thunder as he decides whether to leave for a new locale.

Here’s the other part of the offseason ritual: The name free agent rarely leaves the roost. Durant won’t leave; to do so could cost him upwards of $40 million in a max deal after the league expands the salary cap to around $108 million beginning in the 2018 season.

Expect KD to sign a two-year deal with the Thunder with the choice of opting out after the first year, which would coincide with his buddy Russell Westbrook becoming a free agent.

For the rest of Cedric’s Nuggets, including his take on the comments of Johnny Manziel’s father, click here.