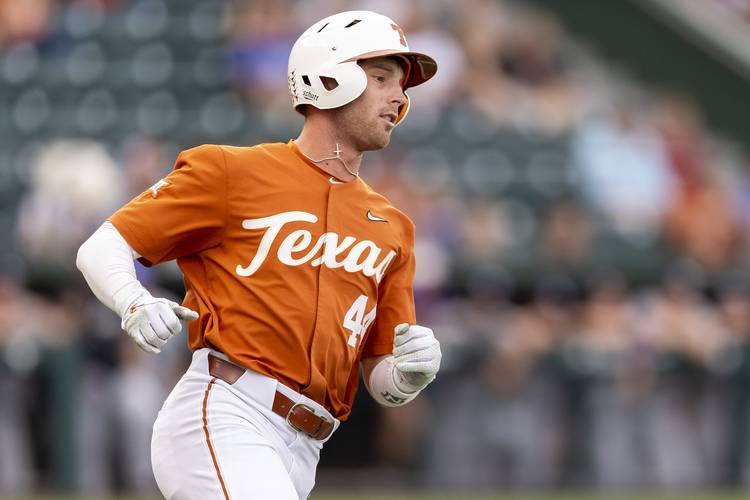 Texas runner Austin Todd (44) heads to first base after hitting a single against Abilene Christian in Austin on March 11, 2020. [Stephen Spillman for Statesman]

Todd will return to Texas for a fifth baseball season. In a tweet that was published on Thursday night, Todd said “Well Texas, can’t get rid of me yet, we’ve got unfinished business.”

Todd was not among the 160 players taken in this week’s MLB draft. He also did not sign a $20,000 deal as an undrafted free agent. Todd was a senior this year, but the NCAA ruled in March that all of its spring athletes were owed a year of eligibility after the coronavirus pandemic shortened their seasons.

Well Texas, can’t get rid of me yet, we’ve got unfinished business. 🤘🏻🤘🏻 pic.twitter.com/8lbVpr26tB

Todd’s return to the Texas outfielder could offset the possible loss of incoming freshman Petey Halpin, who was Cleveland’s third-round pick this week. A Round Rock native, Todd developed into a starter during his freshman year at UT. After an injury-riddled sophomore season, Todd’s 50 hits in 2019 were tied for the second-most in the Longhorn lineup. One of those hits was a walkoff RBI single against No. 2 LSU.

This spring, Texas coach David Pierce described Todd as “our best hitter.” Over the course of the 17-game campaign, Todd led the team in batting average (.375) and runs (14). Todd was employed as UT’s leadoff hitter, but his 15 RBIs still ranked second among the Longhorns.

Todd was one of four seniors on the UT roster in 2020. Pierce has already said that pitcher Donny Diaz won’t be back, but outfielder Duke Ellis and catcher DJ Petrinsky have yet to publicly reveal their plans.