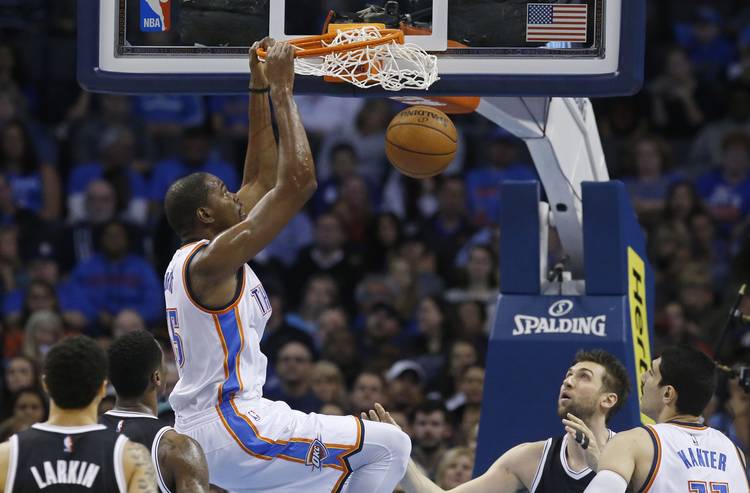 Kevin Durant, F, Oklahoma City Thunder: Durant made his return after missing six games with a hamstring injury and hit the ground running, scoring 57 points combined in his two games back. He had 27 points to go along with six rebounds and four steals in the 111-89 win over Utah on Monday. He followed that up with 30 points, six rebounds, five assists and three blocks in the 110-99 win over the Nets on Wednesday. He’s found the stroke, hitting 21 of 31 shots in those games, including 8 of 14 from behind the 3-point line.

LaMarcus Aldridge, F, San Antonio Spurs: He missed two games last week, due to an ankle injury, but in the two games he did play in that span he scored 38 combined points to go with 18 rebounds. In Friday’s loss to New Orleans he had 20 points and 11 boards and a block. When he returned in the 88-83 win over Dallas on Wednesday he scored 18 and pulled down seven rebounds. He’s averaging 15.5 points and 9.7 rebounds a game.

D.J. Augustin, G, Oklahoma City Thunder: The Thunder have won three in a row and Augustin has contributed modestly, averaging 5.7 points per game in that span. He played 21 minutes and scored nine points on 3 for 6 from beyond the arc in Monday’s win over the Jazz.

Avery Bradley, G, Boston Celtics: Bradley has been on fire offensively through his last four games, averaging 20.8 points. The Celtics have split those games as Bradley has led the team in scoring in three of those contests. He had a team-high 21 points in the 120-95 win over the Nets on Friday coming off the bench. He’s averaging 15.4 points a game this season, almost five points better than his career average.

Tristan Thompson, F, Cleveland Cavaliers: He’s averaged 9.5 points per game over his last four, which is nearly two points better than his season average. He logged a double-double in the 115-100 win over the Bucks last Thursday when he scored 12 points and grabbed 11 rebounds. He had nine points and 16 boards against the Hawks on Saturday. On Wednesday of this week he reunited with former teammate and fellow Canadian, Cory Joseph, when they faced off in Toronto. Thompson scored eight points and had 11 rebounds in the 103-99 loss.

Cory Joseph, G, Toronto Raptors: The Raptors have rattled off three straight wins in which Joseph has averaged seven points a game. He scored 11 and assisted on six baskets in the 102-91 win over the Lakers on Friday and followed that up with six points and four rebounds against the Clippers. In the Raptors win over the Cavs on Wednesday, Joseph got the W, but his former teammate Thompson had better numbers.

P.J. Tucker, F, Phoenix Suns: Tucker’s had a tough stretch recently, as have the Suns, losing three in a row. Tucker played well on Sunday at New Orleans, scoring 12 points and collecting eight rebounds, but in the two games since he has just four points. He went 0 for 5 against the Spurs on Sunday.

Myles Turner, F, Indiana Pacers: He fractured his thumb on Nov. 11 and had surgery on it that will keep him out until around Christmas. He was averaging 6.1 points and 2.9 rebounds per game before he got hurt.