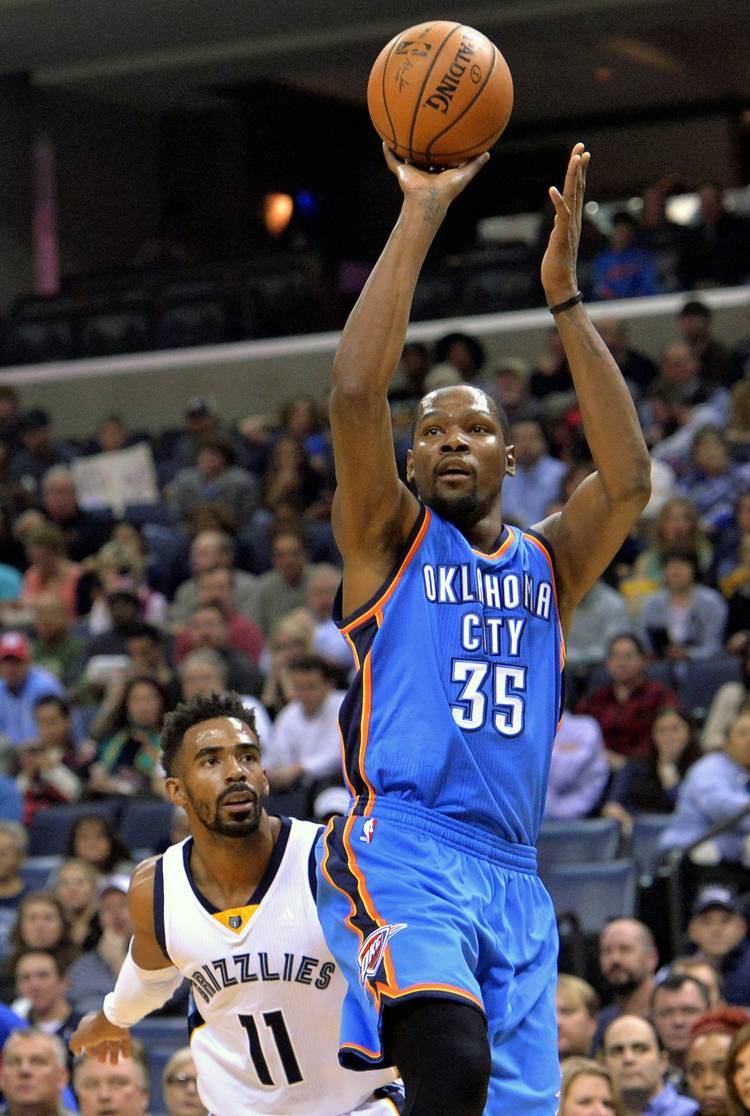 Kevin Durant is performing better than his career averages in points, rebounds and assists this season. (AP Photo/Brandon Dill)

Kevin Durant, F, Oklahoma City Thunder: He’s scored at least 20 points in every game since he’s come back from injury. He had 32 points on 79% shooting in the 125-88 win over the Grizzlies on Tuesday. He’s performing better than his career averages in points (27.9), rebounds (7.9) and assists (3.8).

D.J. Augustin, G, Oklahoma City Thunder: He scored in double digits for the first time since Nov. 2 in the Tuesday  win over the Grizzlies. He had 13 points, three assists and a steal. He hit three 3-pointers on the night. He was held scoreless in his three previous games.

Avery Bradley, G, Boston Celtics: He’s gone 8 for 23 in his last two games for 21 total points, but before that he went 14 for 29 in his previous two games. Last Thursday he scored 20 points and had three steals against the Kings. In Saturday’s loss to the Spurs he scored 18 points and went 4 for 6 from the 3-point line. He’s averaging 15.9 points per game, five more than his career average.

Cory Joseph, G, Toronto Raptors: Joseph got the better of his former Spurs teammates in the Raptors 97-94 win on Wednesday. He scored six points to go along with four assists and three steals. On Monday, he scored 14 against the Lakers to help the Raptors win 102-93. He’s averaging just under ten points per game this season. That’s the best average of his career so far.

P.J. Tucker, F, Phoenix Suns: He had one of his best games of the year in Wednesday’s 107-104 win over the Magic. He scored 11 points on 56% shooting and pulled down eight rebounds in 32 minutes. He’s averaging a point and a half less than his career high at 6.2 per game. He’s grabbing 5.2 rebounds per game.

Myles Turner, F, Indiana Pacers: The rookie has been out with a broken finger since Nov. 11. He was contributing well, averaging 6.1 points per game and 2.9 rebounds before the injury. He’s trying to return to action around Christmas.

Tristan Thompson, F, Cleveland Cavaliers: His scoring has fallen off a bit, since the Cavs aren’t obligated to play with a center at all times. He hasn’t scored in double figures since Nov. 28 against the Nets when he scored 10. In Tuesday’s win over the Blazers he scored just two points and grabbed six rebounds. He’s averaging 9.9 rebounds per game this season.