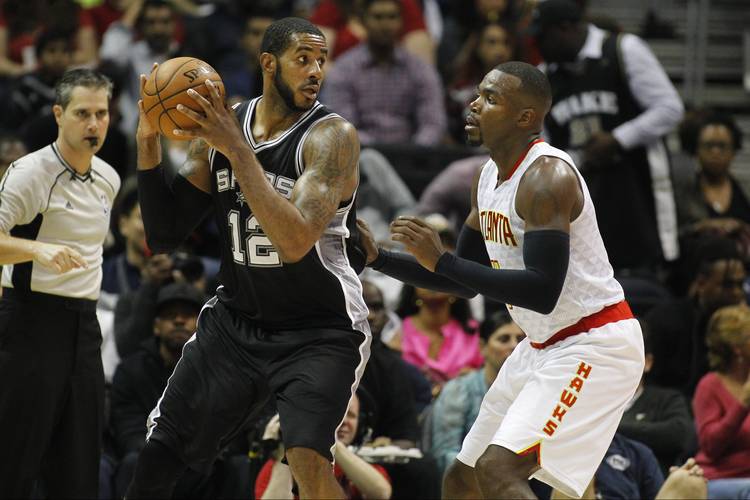 LaMarcus Aldridge and the Spurs have won four in a row by an average margin of 25.8 points per game. (AP Photo/Brett Davis)

Kevin Durant, F, Oklahoma City Thunder: He hasn’t scored less than 20 points since returning from injury, sparking a six-game winning streak entering Thursday. He had a triple-double against the Hawks on Dec. 10 with 25 points, 12 rebounds and ten assists. Scoring 31 against Utah on Sunday, he led the Thunder to a repeat win over the Jazz who they beat two days earlier.

LaMarcus Aldridge, F, San Antonio Spurs: Aldridge has scored in double figures in eight straight games for the Spurs. His scoring average is down from his career mark to 15.7 points, but that’s to be expected when he joined a team with an abundance of offensive options. He notched a double-double in the 109-87 win over the Lakers on Friday, scoring 24 points and grabbing 11 rebounds. That win started a four-game winning streak in which the Spurs averaged a margin of victory of 25.8 points per game. Aldridge had 18 points and eight rebounds in the 37-point win over Utah.

D.J. Augustin, G, Oklahoma City Thunder: He’s scored just ten points in his last five games and has only assisted on four baskets. It’s tough to get going with multiple superstars on the court at one time.

Cory Joseph, G, Toronto Raptors:  Joseph scored 13 points and assisted on three baskets in the Raptors’ 90-83 win over the Bucks on Friday. In the 20-point win over the 76ers, Joseph had eight points, four rebounds and four assists. He’s averaging nearly ten points per game for the first time in his career.

Tristan Thompson, F, Cleveland Cavaliers: His minutes are somewhat down from previous weeks and it looks like he’s expected to do just two things: rebound and defend. He’s scored just two points in his last two games to go along with 15 rebounds.

P.J. Tucker, F, Phoenix Suns: He’s definitely had his ups-and-downs this season. On Dec. 9 he had 11 points to go along with eight rebounds in a win over the Magic, but since then he’s scored 11 points in four games combined. His bright spot this week has come in a win over the T’Wolves in which he scored three points, but added seven rebounds and two steals.

Avery Bradley, G, Boston Celtics: Bradley’s averaging five points better than his career mark, scoring 15.9 points per game. He had a tough game on Wednesday night, scoring just five points, but he’d scored no less than 17 points in his three previous games. He had 23 in the Celtics’ 98-93 win over the Hornets on Saturday. He was 4 for 6 from beyond the arc that night.