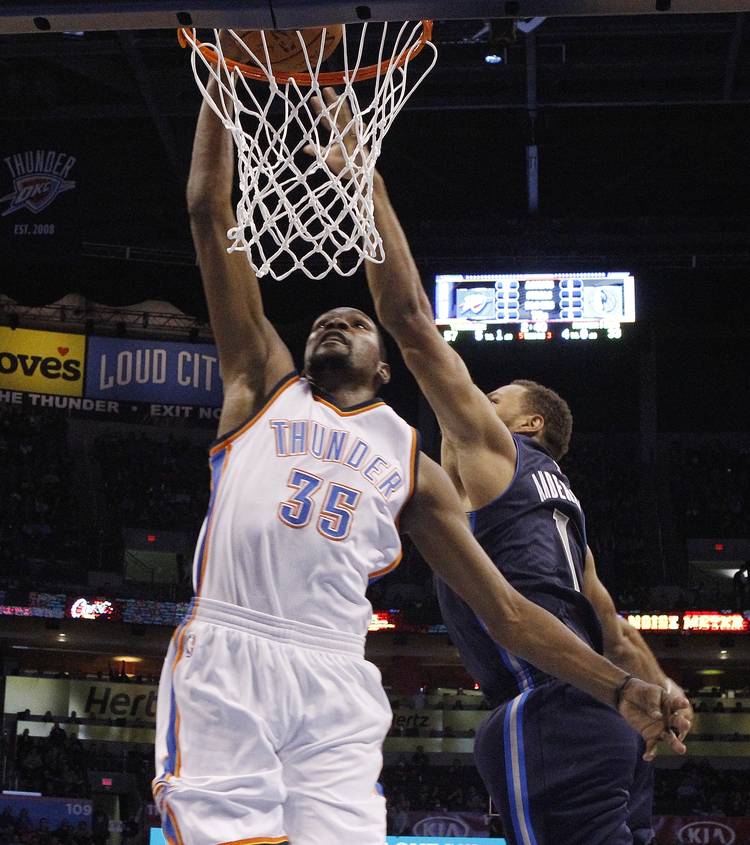 Kevin Durant and the Thunder had a blowout win over the Dallas Mavericks on Wednesday. (AP Photo/Sue Ogrocki)

LaMarcus Aldridge, F, San Antonio Spurs: The Spurs had won nine straight through Wednesday night. Aldridge scored 16 points and grabbed nine rebounds in San Antonio’s 100-99 win over the Knicks to remain undefeated at home this season. Aldridge followed that up with two straight double-doubles against the Nets and Pistons. He scored 25 and hauled in 11 boards against Brooklyn and then had 22 points and 13 rebounds against Detroit the next day.

Kevin Durant, F, Oklahoma City Thunder: Durant has been averaging 27.8 points per game through his last four. He had 24 points on 10 of 15 shooting in Friday’s win over the Lakers and most recently had a double-double against the Mavs. He scored 29 points and grabbed ten rebounds in the Thunder’s 108-89 victory over Dallas. He’s averaging 7.7 rebounds this season, up from his career average of 7 per game.

Tristan Thompson, F, Cleveland Cavaliers: The Cavs had won eight in a row heading into Thursday night’s clash with the Spurs. He scored 10 points and pulled down 10 rebounds in the Cavs win over the 76ers on Sunday. His minutes in January have increased as he’s averaging 30.8 per game, up from 26.5 in December. He’s averaging 9.6 rebounds per game this season.

Myles Turner, F, Indiana Pacers: The rookie’s minutes have gone down quite a bit since his first two games back from injury. He averaged 19.5 minutes and eight points a game in the last two games of December, both Pacers’ losses. In January he’s only averaging 9.4 minutes per game. He’s still managing to contribute. In just ten minutes of Wednesday’s loss to the Celtics, he scored nine points and collected five rebounds. On the season he’s averaging 5.7 points per game and 3.5 rebounds.

Avery Bradley, G, Boston Celtics: He returned from a bruised left hip on Sunday when he scored 14 points and made two steals in the loss to the Grizzlies. He scored in double figures in his next game, but the Celtics were on the losing side of a 120-114 final against the Knicks. Bradley scored 11 points and assisted on six baskets to help halt a four-game losing streak on Wednesday against the Pacers. He’s averaging 14.4 points per game so far this season.

P.J. Tucker, F, Phoenix Suns: The Suns have played twice in the last seven days and both were losses. Tucker scored five points in each game, but contributed by hitting the glass. He had 11 rebounds against the Heat on Friday, followed by 10 boards against the Pacers on Tuesday. He’s averaging 6.5 points per game and 5.6 rebounds.

Cory Joseph, G, Toronto Raptors: Joseph continues to do a little bit of everything for the Raptors, who had won three in a row entering Thursday. He had eight points, four rebounds and two assists in the Raptors’ 97-88 win over the Wizards on Friday. He also had a block and a steal in the win. In Saturday’s 108-95 win over the 76ers on Saturday he scored nine points, collected five rebounds and assisted on four shots. He had a block and a steal in that game as well.

D.J. Augustin, G, Oklahoma City Thunder: Augustin hadn’t seen any minutes in eight straight games, but finally got into the game during a blowout win over the Mavs. He’s averaging 4.3 points per game this year.