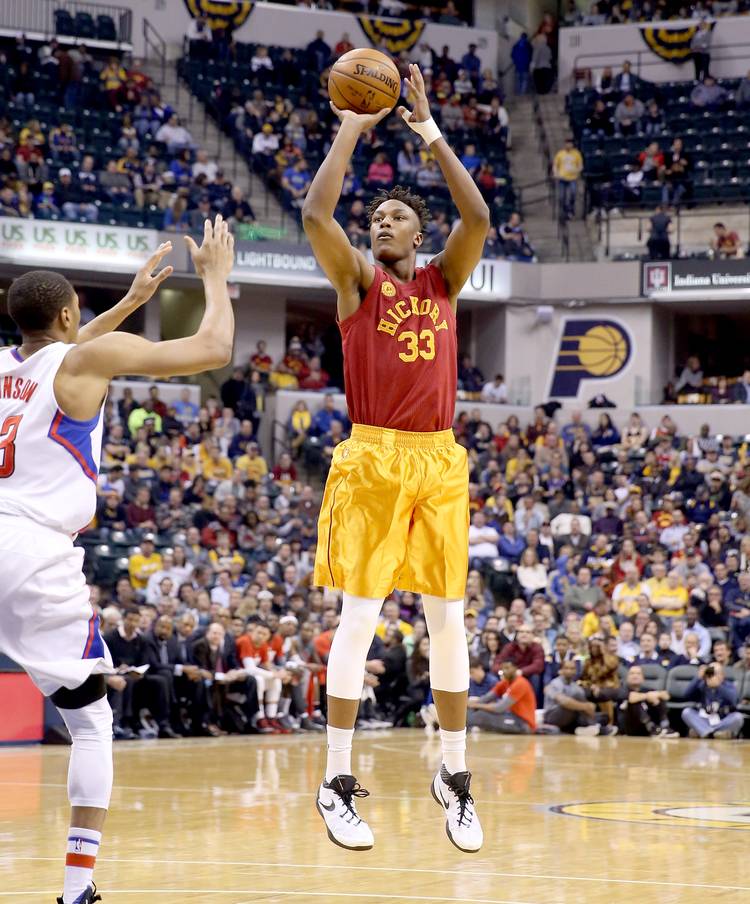 Rookie Myles Turner is starting to break out as his minutes increase. (Photo by Andy Lyons/Getty Images)

Kevin Durant, F, Oklahoma City Thunder: Durant has extended his 20-plus points scoring streak to 33 games. His 44-point outburst on Tuesday helped the Thunder defeat the Knicks 128-122. He also had 14 rebounds and five assists in the game. He scored 32 points in the Thunder’s loss to the Nets on Sunday after scoring 24 in Friday’s 109-106 win over the Mavs. In Wednesday night’s 126-123 win over the Timberwolves he scored 27 to go along with nine rebounds and five assists. He’s averaging 27 points per game, just .3 below his career average. He’s also hauling in 7.9 rebounds per game, up .9 from his career average.

Myles Turner, F, Indiana Pacers: Despite his team going on a three-game losing streak entering Thursday, Turner has been playing really well with increased minutes. He scored a career-high 31 points in 28 minutes against the Golden State Warriors on Friday. He had 11 points in Saturday’s loss to the Kings to go with six rebounds and five blocks. In Tuesday’s two-point loss to the Clippers, Turner scored 16 points and grabbed six rebounds.

LaMarcus Aldridge, F, San Antonio Spurs: Aldridge had a tough stretch from Thursday through Monday, but bounced back with a nice game against the Rockets on Wednesday. He scored 25 points, pulled down ten rebounds to go along with five assists. He was 9 of 13 on the night. In the Spurs’ blowout loss to the Warriors, he scored just five points on 2 of 9 shooting. Even in a 117-89 win over the Suns last Thursday, he scored just seven points.

Tristan Thompson, F, Cleveland Cavaliers: The Cavs have gone 3-1 in the last seven days and Thompson has had a mixed bag of performances. In Wednesday’s 115-93 win over the Suns Thompson scored five points and grabbed five rebounds in 28 minutes. Two days before, he notched a double-double as he scored 19 points and hauled in 12 rebounds in the 114-107 win over the Timberwolves. In the Cavs 96-83 loss to the Bulls Thompson had one point and five rebounds in 22 minutes. Though is scoring is down from his career average, he’s collecting nearly one more rebound per game at 9.3 per contest.

Cory Joseph, G, Toronto Raptors: Entering Thursday, the Raptors were on a nine-game winning streak. They have the second-best record in the East and Joseph is a big part of that. He scored ten points and dished out six assists in the Raptors’ 106-89 win over the Wizards on Tuesday. In the 112-94 win over the Clippers, Joseph scored 12 points and made three assists. In his previous two games he scored just four points combined.

Avery Bradley, G, Boston Celtics: Bradley has turned up his scoring this year, to the tune of 15 points per game. That’s up from 11.1 for his career average. The Celtics are on a four-game winning streak heading into Thursday. Bradley’s best game in the last seven days was on Wednesday when he scored 27 points and made four steals against the Nuggets. He had just 11 points in a 116-91 blowout win over the Wizards on Monday. He was 3 for 4 from behind the arc in the 112-92 win over the 76ers on Sunday on the way to scoring 19. He scored 21 in a 110-101 win over the Bulls on Friday to help bring them to within a half-game of the fourth seed in the East.

P.J. Tucker, F, Phoenix Suns: The highlight of Tucker’s week was a 16 point-6 rebound performance in the Suns’ 98-95 win over the Hawks. The Suns are 1-8 in their last nine games and haven’t won back-to-back games since Dec. 9. Tucker scored 13 points and collected seven rebounds in Wednesday’s loss to the Cavs.

D.J. Augustin, G, Oklahoma City Thunder: He’s played just 14 minutes in the last 17 games as he’s made way for rookie Cameron Payne. He did get into Wednesday’s 126-123 win over the Timberwolves and scored two points to go along with a couple boards. Payne suffered a concussion in the game and will be out Friday, so Augustin may pick up more minutes.