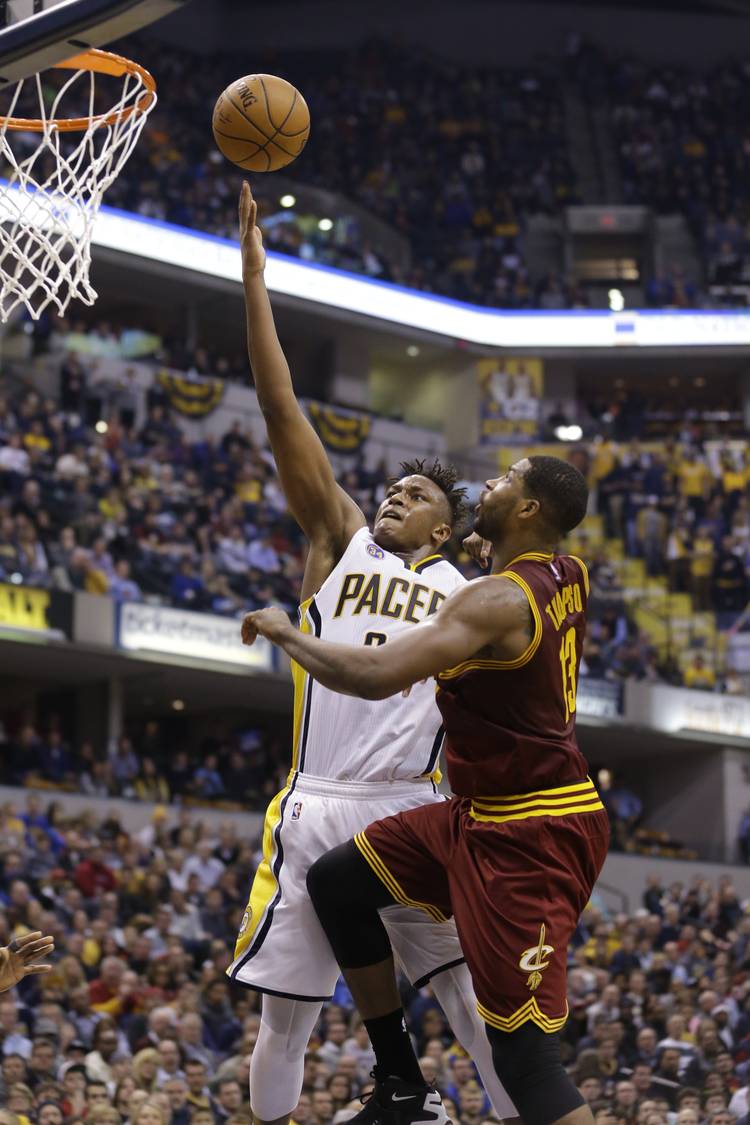 Former Longhorns Myles Turner and Tristan Thompson went head-to-head as the Cavs defeated the Pacers 111-106 in overtime on Monday. Turner's block of Lebron James in the game is the highlight of his young career. (AP Photo/Michael Conroy)

Kevin Durant, F, Oklahoma City Thunder: By now you’ve seen his last-second heroics last night against the Magic. Durant had 37 points in the game, including six 3-pointers. He has also extended his streak of games scoring 20 or more points to 36. He’s guiding the Thunder under the radar as teams like the dominating Golden State Warriors, the steady Spurs and the newly improved Cleveland Cavs take up a lot of attention. Entering Thursday, Oklahoma City had won their last 12 out of 13 games and were eight games behind the Warriors and just four games behind the Spurs. Speaking of the Warriors, a nightmare scenario (for the rest of the NBA) has emerged with the possibility that Durant could eventually join Golden State as a free agent. If that happens, watch out.

Myles Turner, F, Indiana Pacers: Turner continues to impress as the Pacers have won three of their last four games entering Thursday. He scored 20 points and had six boards in last Thursday’s 111-92 win over the Hawks. He followed that up with eight points and nine rebounds in the 109-105 win over the Denver Nuggets on Saturday. He played 40 minutes in that game and had four blocks. Despite losing to the Cavs 111-106 on Monday, Turner probably had the highlight of his young career as one of his four blocks came against Lebron James going for a dunk. Turner had 14 points and ten rebounds in the game. On the year he’s averaging 9.5 points, 4.6 rebounds and 1.5 blocks per game. Watch his amazing block here:

LaMarcus Aldridge, F, San Antonio Spurs: In the Spurs’ last two wins after falling to the Cavs on Saturday, Aldridge has come up big, scoring 28 and 36 points, respectively. In the 117-103 loss to the Cavs Aldridge had 15 points on 7 of 11 shooting. In the 107-92 win over the Magic, Aldridge had 28 points on 9 of 13 shooting. He also had five blocks in that game. In the 110-97 win over the New Orleans Pelicans on Wednesday he scored a season-high 36 and shot 60% in addition to collecting six rebounds and making three blocks. In his last three games he’s .643 from the field.

Cory Joseph, G, Toronto Raptors: Nobody’s really giving the Toronto Raptors much credit for what they’ve done so far in the Eastern Conference. They’re just 2.5 games behind the Cavs at 33-16 and they’ve won 12 of their last 13 games. Joseph has been solid off the bench, backing up Kyle Lowery. He’s scored in double digits in five of his last six games, including ten points and four assists in the 104-97 win over the Suns on Tuesday. On Saturday he had 16 points in the win over the Pistons after scoring 11 against the Knicks last Thursday. All of his major category numbers are above his career averages and he leads the team in assist-to-turnover ratio.

Avery Bradley, G, Boston Celtics: Bradley scored 15 points in the Celtics’ 102-95 win over the Pistons on Wednesday, improving from his previous game in which he scored just six. In Sunday’s 119-114 loss to the Magic he scored 22, but in Friday’s game against the Magic he scored just six and the Celtics won. Go figure. The Celtics have won seven of their last eight games and are in fourth place in the Eastern Conference. Bradley is averaging 14.8 points per game, second on the team behind Isaiah Thomas.

Tristan Thompson, F, Cleveland Cavaliers: The Cavs had won five in a row before Wednesday’s surprise upset loss to the Charlotte Hornets. Thompson didn’t fare well in 34 minutes as he scored just four points and grabbed four rebounds. In the previous game’s win over the Pacers he scored 14 and hauled in 12 boards. In fact, that game made it three straight that he had scored in double digits. He previously had ten points in a 117-103 win against the Spurs on Saturday after he scored 11 while collecting 14 rebounds against the Pistons on Friday. He’s scoring nearly two points less than his career average (7.9, down from 9.8) but he’s up in rebounds per game so far this season (9.3).

P.J. Tucker, F, Phoenix Suns: The Suns have the second-worst record in the league, only ahead of the Lakers, and were in the midst of a five-game losing streak headed into Thursday. Tucker’s performances have been a mixed bag all year. He scored 10 points and grabbed six rebounds in the 104-97 loss to the Raptors on Tuesday. Before that, on Sunday, he had a rough game against the Mavs in which he scored just two points in 42 minutes. He had nine points and ten boards against the Knicks in the 102-84 loss on Friday.

D.J. Augustin, G, Oklahoma City Thunder: Augustin was able to play 18 minutes in Friday’s 116-108 win over the Rockets and scored three points to go along with five rebounds and five assists. He hasn’t played since rookie Cameron Payne’s return to the lineup.

Texas football alums react on Twitter to the class of 2016

What grade do we give the Longhorns’ Class of 2016?