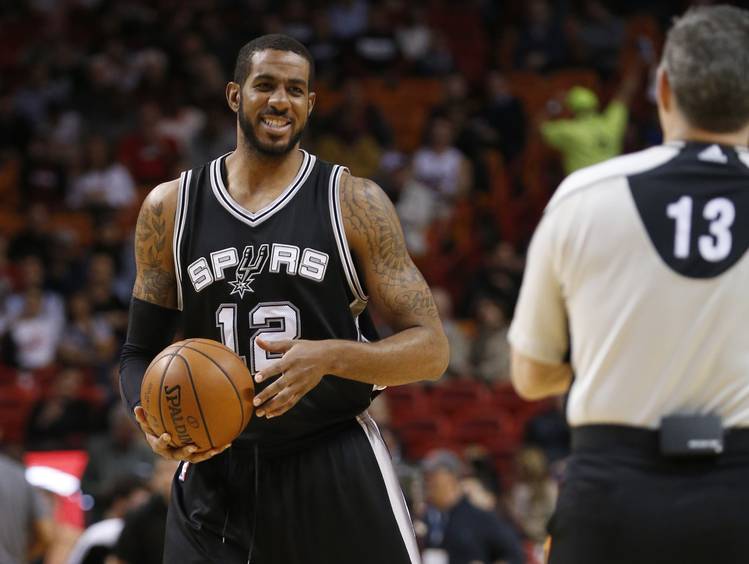 LaMarcus Aldridge will join Kawhi Leonard in representing the Spurs in the All-Star game on Sunday. (AP Photo/Wilfredo Lee)

Kevin Durant, F, Oklahoma City Thunder: Durant entered Thursday with a 38-game streak of scoring at least 20 points in a game. His last seven days were highlighted by his 40-point performance against the Warriors, though the Thunder lost, and a 32-point effort against the Phoenix Suns in a win on Monday. Durant also had 14 rebounds against Golden State on Saturday, but it wasn’t enough against the league’s best team. Durant will prepare to start for the Western Conference in the NBA All-Star game on Sunday. Last Sunday he took a break from basketball to try his hand at photography at the Super Bowl.

LaMarcus Aldridge, F, San Antonio Spurs: Aldridge and the Spurs are in the midst of a six-game winning streak heading into the All-Star break. Most recently, he knocked down a shot with just over a minute to play to put his Spurs up on the Magic before Kawhi Leonard sealed the win with a last-second shot. Aldridge finished that game with 21 points, seven rebounds and two blocks. A day before that, Aldridge led the Spurs with 28 points in the 119-101 win over the Miami Heat. In Saturday’s 106-102 win over the Lakers on Saturday, he scored 26 and pulled down nine rebounds. Aldridge had a double-double in Friday’s blowout win over the Mavs as he scored 14 points and grabbed ten boards. He’ll take the court at the NBA All-Star game on Sunday as a Western Conference reserve player.

Avery Bradley, G, Boston Celtics: On Friday Avery Bradley hit a clutch 3-pointer to lift the Celtics over the Cleveland Cavaliers. He scored 14 points and went 4 for 8 on 3-pointers in the game. He followed that up with 25 points in the 128-119 win over the Kings on Sunday. Back-to-back games of scoring 18 points has Bradley averaging 15.1 points per game heading into the All-Star break.

Myles Turner, F, Indiana Pacers: Turner has scored in double digits in four straight games, most recently scoring ten points in the 117-95 loss to the Hornets on Wednesday. Before that he notched a double-double, scoring 14 points and hauling in 13 rebounds in the 89-87 win over the Lakers on Monday. Seven of his points in that game came in the fourth quarter. On Saturday he scored 16 points in the Pacers’ 112-104 win over the Detroit Pistons. He’s shot 57 percent in his last four games and his average minutes per game are up to 29.2 in February from 19.2 in January.

Tristan Thompson, F, Cleveland Cavaliers: Thompson broke out of a scoring slump in Wednesday’s 120-111 win over the Lakers, scoring 15 points and collecting 13 rebounds. He also had four assists, his best since Nov. 21. In his previous three games he scored just 3-0-2. He still rebounded well, however, pulling down 10-15-10.

P.J. Tucker, F, Phoenix Suns: The Suns have lost 15 of their last 16 games, but the Suns somehow hung with the Golden State Warriors on Wednesday, only losing by eight points. He has 37 points in his last four games.