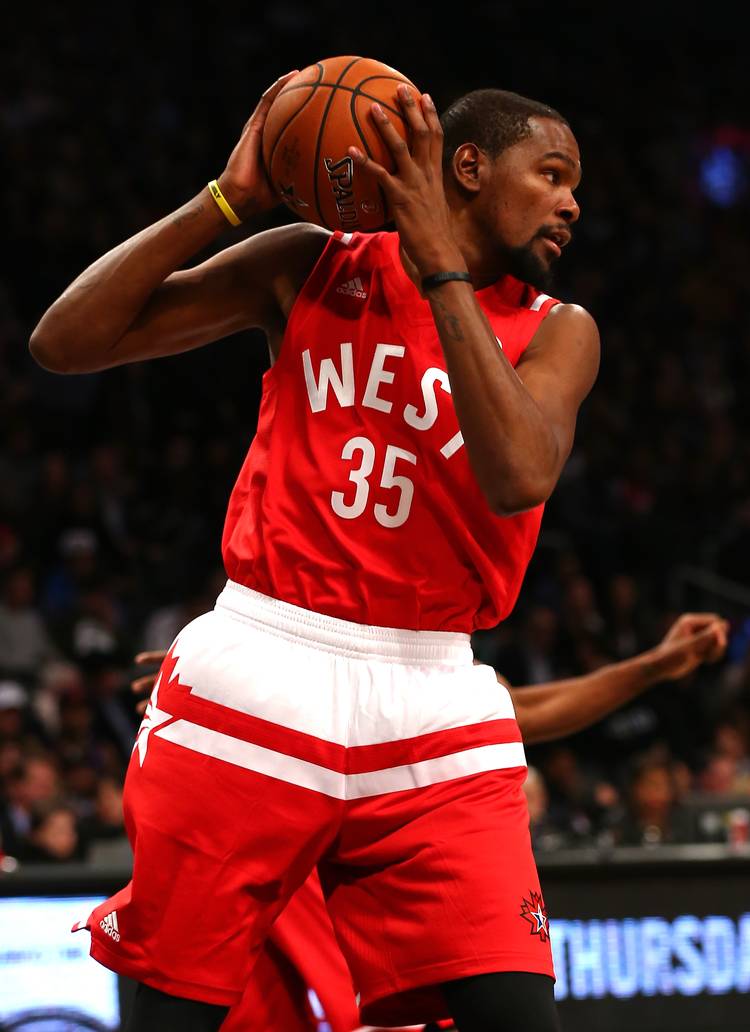 TORONTO, ON - FEBRUARY 14: Kevin Durant #35 of the Oklahoma City Thunder and the Western Conference gets a rebound in the first half against the Eastern Conference during the NBA All-Star Game 2016 at the Air Canada Centre on February 14, 2016 in Toronto, Ontario. (Photo by Elsa/Getty Images)

Kevin Durant, F, Oklahoma City Thunder: Since we last checked in, Durant scored 23 points in the 121-95 win over the New Orleans Pelicans last Thursday. He also had six assists and a steal in the game. He followed that up with another strong performance as a starter in the NBA All-Star game. He scored 23 points in that game as the teams combined for the most points in NBA All-Star game history. Durant is in the midst of 39 straight games of scoring at least 20 points.

LaMarcus Aldridge, F, San Antonio Spurs: Aldridge has found a groove recently, riding a three-game streak of scoring at least 20 points. In each of November and December Aldridge scored 20 or more points just four times. In January he scored 20-plus points only five times. In the month of February so far Aldridge already has scored at least 20 points five times. He scored a season-high 36 points on Feb. 3 against the Pelicans. He had a quiet night as a reserve in the NBA All-Star game on Sunday, scoring four points.

Avery Bradley, G, Boston Celtics: Bradley hasn’t played since before the All-Star game and the Celtics have won 10 out of the last 12 games. He’s averaging 15.1 points per game, better than his career average by four points.

Myles Turner, F, Indiana Pacers: Turner will look to continue his improved play as of late. The rookie has scored in double digits for four straight games and 12 out of his last 14 games. He’s averaging 9.9 points per game and five rebounds.

Cory Joseph, G, Toronto Raptors: Joseph’s Raptors have won 14 out of 16 games and he’s averaging 8.8 points per game, nearly three points better than his career average. He’s scored in double digits in three out of his last four games.

Tristan Thompson, F, Cleveland Cavaliers: His scoring is down from his career average, but he’s making 9.5 rebounds per game. He’s shooting 65% in February so far.

D.J. Augustin, G, Denver Nuggets: His spot was taken over by rookie Cameron Payne and he’s therefore being sent to the Denver Nuggets in exchange for Randy Foye. Augustin played just 32 minutes in January and had played no minutes in February with the Thunder. We’ll see if he can work his way into a role with the Nuggets. Anything would be better than riding the bench for entire games like he has been in Oklahoma City.