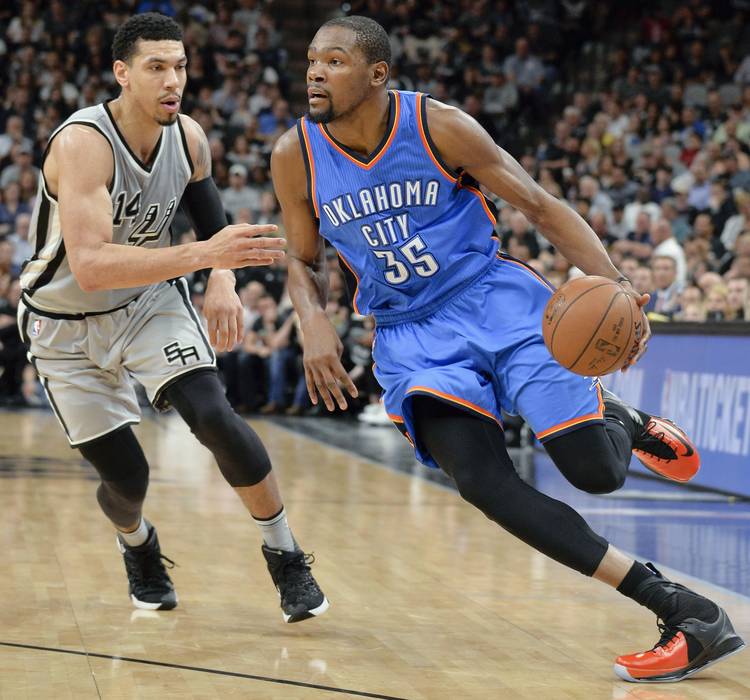 Kevin Durant, F, Oklahoma City Thunder: He’s continuing to score at will, extending his streak of scoring at least 20 points to 53 games. He had just 20 in the 34-point rout of the Trailblazers on Monday. He played just 26 minutes and had five rebounds and seven assists in the blowout. He had 28 points in each of the games against the Timberwolves, Spurs and Celtics in the past week. On the season he’s averaging, you guessed it, 28 points per game. He filled the box score in the 130-109 win over the Celtics, grabbing seven boards to go along with nine assists and two blocks.

LaMarcus Aldridge, F, San Antonio Spurs: Each month as a Spur Aldridge has either stayed the same or improved on his scoring output. So far in March he’s averaging 24 points per game, up from 20.5 per game in February. Through Wednesday he’s scored at least in double digits for nine straight games. His 26 points and 10 rebounds helped the Spurs defeat the Bulls 109-101 last Thursday. The Spurs notched a big win over the Oklahoma City Thunder on Saturday with the help of Aldridge’s 24 points and nine boards. He had 17 points, six rebounds and two steals in the 108-87 win over the Clippers on Tuesday.

Avery Bradley, G, Boston Celtics: The Celtics have lost three in a row and Bradley’s averaging less points per game this month than he did in February. Though he scored 14 points and had two rebounds and two assists against the Thunder on Wednesday, the Celtics lost by 21. Before that they fell to the Rockets and Pacers by a combined nine points. Bradley had 16 against the Rockets and 10 against the Pacers.

Myles Turner, F, Indiana Pacers: Turner scored 15 points and had seven rebounds in the 112-105 win over the Mavs on Saturday before scoring 19 points in a bad loss to the Hawks on Sunday. His scoring has taken a bit of a hit this month as he’s averaging 9.9 points per game, nearly four points less than he averaged in February. On the season overall, the rookie is averaging 10.6 points per game, 5.1 rebounds and 1.4 blocks.

Cory Joseph, G, Toronto Raptors: His scoring is down this month, though his minutes are slightly up. The Raptors have won six out of eight games during March through Wednesday, so he probably doesn’t mind. He scored six points to go with six assists in the 107-89 win over the Bucks on Tuesday. In fact, he’s scored six points in five out of eight games so far this month.

P.J. Tucker, F, Phoenix Suns: On a rare successful night for the Suns Tucker scored 23 points and had 12 rebounds in the 107-104 win over the Timberwolves. He also had five assists in the game as he played 40 minutes. He’s averaging 7.5 points per game to go along with 6.4 rebounds.

Jordan Spieth predicts a Texas win over A&M at NCAAs

Texas battles back to win at Rainbow Wahine Classic