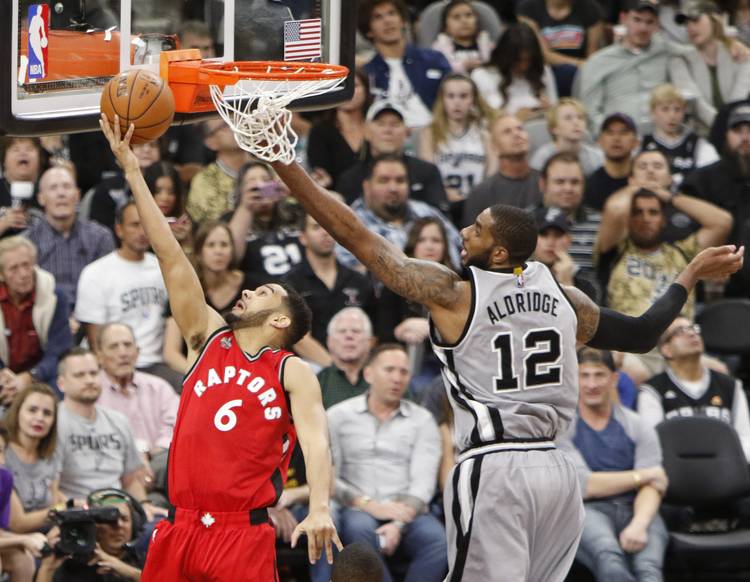 LaMarcus Aldridge, F, San Antonio Spurs: Aldridge started April with a big game against the Toronto Raptors, the second-seeded team in the Eastern conference. He scored 31 to go along with 15 rebounds. He was 12 for 18 in the game. Utah nearly tripped up the Spurs in the following game, but Aldridge’s 14 points, 7 rebounds and 4 steals helped the Spurs hold on to a 88-86 win over the Jazz on Tuesday. He finished March with an average of 22.6 points per game, the most for him in any month so far this season.

Kevin Durant, F, Oklahoma City Thunder: Durant missed Wednesday’s game against the Portland Trailblazers due to rest, but before that he went 31-33-26 in terms of scoring output in his previous three games. He had 31 in the 119-117 win over the Clippers last Thursday before putting up 33 in a loss to the Rockets. His 26 points led the Thunder in a 124-102 win over the Nuggets on Tuesday. He averaged 28.4 points per game in March.

Myles Turner, F, Indiana Pacers: He finished March averaging 9.5 points and 6.4 rebounds per game for the month. He started April with an 8-point, 10-rebound performance in the 115-102 win over the 76ers on Saturday. He came off the bench in that game, but that didn’t affect his minutes. He followed that up with 12 points and six rebounds in a 92-87 win over the Knicks. He played just five minutes against Cleveland on Wednesday, due to coach’s decision, and failed to log a stat. He definitely hit the rookie wall as defenses have adjusted to his style of play. With the Pacers in the playoff hunt, it will be interesting to see how he performs.

Cory Joseph, G, Toronto Raptors: Joseph’s scoring was down in March, he averaged just 6 points per game after averaging 11.3 in February. April is looking up so far for him. He scored 16 points and dished out 7 assists in Saturday’s loss to his former team, San Antonio. He followed that up with an 11-point performance in the win over the Hornets on Tuesday. On the year he’s averaging 8.5 points per game.

D.J. Augustin, G, Denver Nuggets: Despite three losses in a row entering Thursday, Augustin has played pretty well. He had 9 points and 8 assists in last Thursday’s loss to New Orleans before he scored another 9 points in 19 minutes against the Kings. On Tuesday he had 15 points, 4 assists and 2 steals as the Nuggets fell to the Thunder. He averaged 13.3 points per game in March which is well above his season average of 7.7.

Avery Bradley, G, Boston Celtics: Following a 116-109 loss to the Trailblazers last Thursday, in which Bradley scored 20, the Celtics ended the Golden State Warriors home winning streak on Friday. Bradley had 15 points as the Celtics won 109-106 on the Warriors’ home floor. Bradley had four assists and two steals in the game. In the win over the New Orleans Pelicans, Bradley scored 13 and made six rebounds to go with three steals. He’s averaging 15.1 points per game this season on the way to helping the Celtics secure a playoff berth.

Tristan Thompson, F, Cleveland Cavaliers: In four games so far in April, he’s averaging 8.3 points and 8 rebounds per contest. He had 11 points and 7 boards in the 109-80 win over the Bucks on Tuesday. He had 9 points and 14 rebounds in Friday’s win over the Hawks.

P.J. Tucker, F, Phoenix Suns: Entering Thursday, the Suns were in the midst of a seven-game losing streak, but Tucker was playing well. He had 18 points and 10 rebounds in Friday’s loss to the Wizards before scoring 14 against the Jazz on Sunday. He just missed out on another double-double, pulling down 9 rebounds in that game. He put up a real dud against the Hawks on Tuesday, going 0 for 8 from the field. He did have 8 boards in the game.