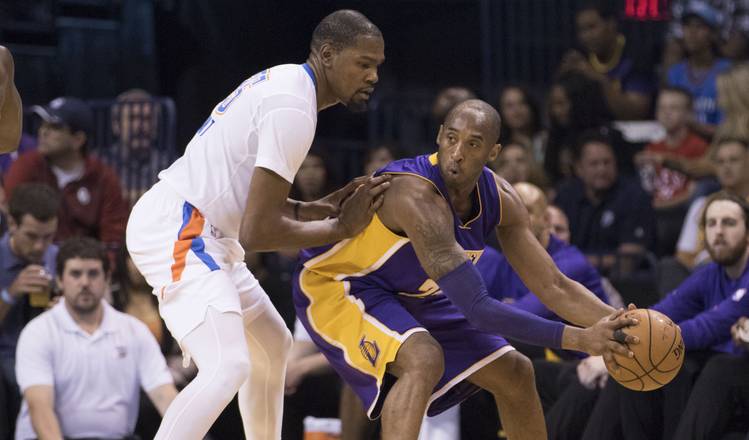 OKLAHOMA CITY, OK - APRIL 11: Kobe Bryant #24 of the Los Angeles Lakers tries to drive around Kevin Durant #35 of the Oklahoma City Thunder during the first quarter of a NBA game at the Chesapeake Energy Arena on April 22, 2016 in Oklahoma City, Oklahoma. (Photo by J Pat Carter/Getty Images)

Kevin Durant, F, Oklahoma City Thunder: He ended the season on a 64-game streak in which he’s scored at least 20 points in a game. He had 34 points in the 112-79 win over the L.A. Lakers after putting up 31 points against the Sacramento Kings in the loss. For some perspective, Kobe Bryant’s best 20-point game streak was 63 games and Michael Jordan’s best streak lasted 72 games. Following the win over the Lakers, Bryant said he didn’t see Durant’s streak ending anytime soon. Durant and the Thunder are set to host the Dallas Mavericks on Saturday at 8:30 p.m. In his last meeting with the Mavs in March he scored 24 points to go along with 8 rebounds and 6 assists. He averaged 28.2 points per game and 8.2 rebounds to go along with 5 assists.

LaMarcus Aldridge, F, San Antonio Spurs: Aldridge didn’t see much action in the final week of the season as he prepares to help lead the No. 2 seed Spurs against the Memphis Grizzlies in the first round of the NBA playoffs. The Spurs lost back-to-back games for the first time this season last week as they fell to the Golden State Warriors two out of three games. Aldridge had 24 points and 10 rebounds in the 92-86 loss on Sunday. He scored 8 points in limited action against in the 102-98 win over the Oklahoma City Thunder on Tuesday. He hurt his finger during that game and rested the following contest with Dallas. The last time Aldridge played the Grizzlies, he scored 31 points and had 13 rebounds with two blocks. He ended the year averaging 18 points and 8.5 rebounds per game.

Myles Turner, F, Indiana Pacers: The Pacers ended the season on a three-game winning streak. Turner scored 45 points in total over those three games. He definitely hit the rookie wall late in the season, but he’s had a couple of good games recently. He scored 28 points and had 10 rebounds in the 129-105 win over the Brooklyn Nets on Sunday. He followed that up with a 13-point, 5-rebound game against the New York Knicks. He ended the season averaging 10.3 points and 5.5 rebounds per game. He also had 1.4 blocks per game. The Pacers are a 7-seed and are set to face the Toronto Raptors in the first round.

Cory Joseph, G, Toronto Raptors: Speaking of the Raptors, Turner will face another former Longhorn in Cory Joseph, who plays backup point guard for Toronto. The Raptors ended the season on a four-game winning streak. Joseph’s biggest game was an 18-point, 9-assist effort in a 111-98 win over the Pacers on Friday. We’ll see if he can find the same kind of success in the first round series with Indiana. Joseph ended the season scoring 8.5 points per game, more than two points better than his career average.

Avery Bradley, G, Boston Celtics: He ended the season on a 12-game streak of scoring at least double digits. He had 17 points in two straight games to end the season against Charlotte and Miami. Bradley had a career year in terms of scoring as he averaged 15.2 points per game, up nearly four points from his career average. He also finished with 2.1 assists, 2.9 rebounds and 1.5 steals per game. All were career highs.

Tristan Thompson, F, Cleveland Cavaliers: Before resting in the season finale, Thompson had a strong game against the Atlanta Hawks on Monday. He scored 9 points and pulled down 10 rebounds in addition to making 3 steals and a block. His scoring was down this season by nearly two points per game. He scored 7.8 points per game, but improved in rebounding by averaging 9 rebounds per contest. The Cavs are the No. 1 seed and are set to host the Detroit Pistons beginning on Sunday at 2 p.m. Thompson had one double-double against the Pistons this season.

D.J. Augustin, G, Denver Nuggets: Though he ended the season on a tough stretch, his season was revitalized when he was traded to Denver from Oklahoma City in March. After averaging just 1.7 points in February playing just 11 minutes per game he was able to increase that average to 10.8 points per game in 23.2 minutes. On the season he averaged 7.5 points per game to go along with 3.2 assists per game. His Nuggets missed the playoffs so his season is over.

P.J. Tucker, F, Phoenix Suns: Tucker’s Suns had a pretty terrible season, but he hit career highs in points, assists and rebounds per game. He finished the year with 14 points, 7 rebounds and 3 assists in the 114-105 win over the L.A. Clippers. He had a double-double in a loss to the Kings before that. He had 15 points and 10 rebounds to go along with 4 assists in that game. His best game last week was in a 124-115 win over the Rockets last Thursday. He had 24 points, 12 rebounds and 5 assists in the game.