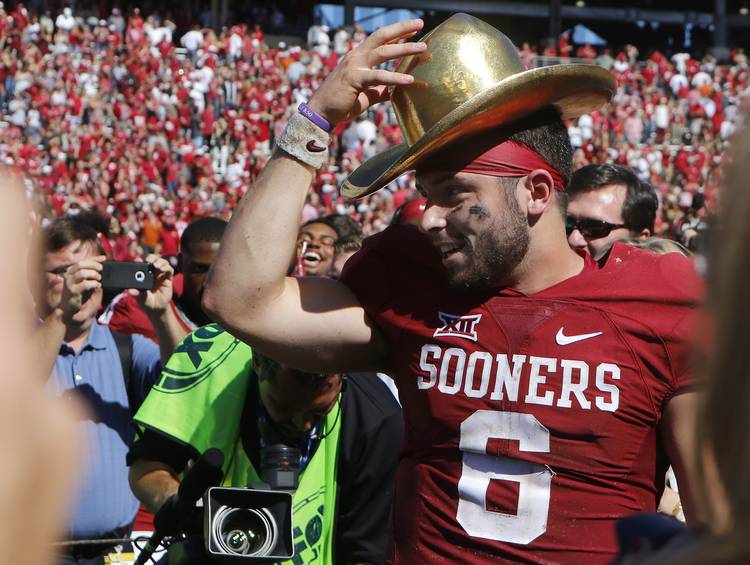 Following a 38-20 win over Oklahoma State on Saturday, Mayfield told reporters that he would return to Oklahoma’s football team in 2017. A redshirt junior, Mayfield has led Oklahoma to a 10-2 record this season with one of those victories being a 45-40 win over Texas. A Lake Travis graduate, Mayfield is 1-2 in his collegiate career against his hometown team.

Mayfield’s announcement came one day after Iowa State receiver Allen Lazard, who caught seven passes against the Longhorns in October, elected to return for his senior season.

.@baker_mayfield6 announces in postgame press conference that he will return to OU next season. Wants a Big 12 3-peat and a national title.

Mayfield was eligible to leave school following last year’s fourth-place finish in the Heisman Trophy balloting, but he regained a year of eligibility when he successfully argued that he shouldn’t be punished for his 2013 transfer from Texas Tech to Oklahoma. Mayfield walked onto Texas Tech’s football team, and he had not been offered a scholarship when he left Lubbock.

Mayfield: I fought for that extra year of eligibility for too long

This year, Mayfield has thrown for 3,669 yards and 38 touchdowns while completing 71.2 percent of his passes. Once again a candidate for the Heisman Trophy, he has also rushed for six scores.

Mayfield has appeared in 33 games at Texas Tech and Oklahoma, and he has made 32 starts. Mayfield’s right arm exceeded the 10,000-yard milestone in the 18-point win over Oklahoma State, and he has thrown 86 touchdown passes in his career.

If you haven’t already, Tom Herman’s wife is a must-follow on Twitter