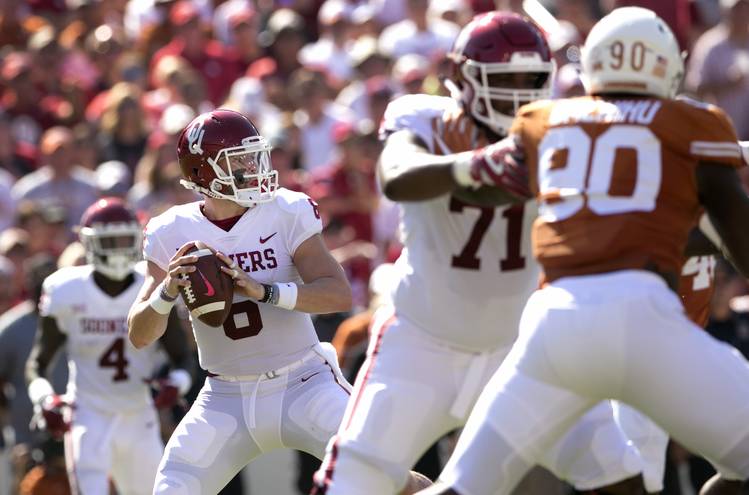 Oklahoma quarterback Baker Mayfield (6) drops back to throw against Texas at the Cotton Bowl in Dallas on Oct. 14, 2017. JAY JANNER / AMERICAN-STATESMAN

For the third straight year, no Longhorn was selected in the first round of the NFL Draft.

Texas fans, however, still heard a few familiar names called out on the first night of the NFL Draft. Three players who appeared on UT’s 2017 schedule were selected in the first round on Thursday night.

Here is a look at how Texas did this past season against players selected in the first round of the NFL Draft:

Texas met Mayfield and the Sooners at the Cotton Bowl this past October. The eventual Heisman Trophy winner completed 17 of his 27 passes, and his final throw was a 59-yard touchdown that decided the game. With 302 yards, Mayfield was one of only two quarterbacks to top 300 yards against UT’s secondary in 2017.

This marks the third time in the past decade that Texas saw the top pick before the NFL Draft. UT played California quarterback Jared Goff (2016) and Oklahoma quarterback Sam Bradford (2010) ahead of their ascension to the top of the draft order.

The other quarterback to throw for more than 300 yards against Texas? That would be Darnold, who had 397 yards over two overtimes on Sept. 16, 2017. Darnold was intercepted twice by fellow prospect DeShon Elliott in the game, and Elliott returned one of those turnovers for a touchdown. Darnold completed 57.1 percent of his 49 passes but got the last laugh as his Trojans rallied for a 27-24 win.

Moore opened last season with a seven-catch, 133-yard performance at Royal-Memorial Stadium. He also scored on a 20-yard pass and recorded a first down on a 3rd-and-19 play in the 51-41 win. Against the Longhorns last year, only Texas Tech receiver Keke Coutee (168 yards) bested Moore’s production.

This week in mock drafts: Final predictions for the NFL-bound Longhorns