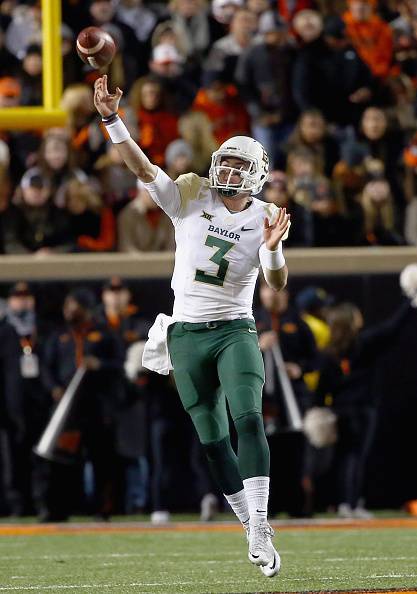 Jarrett Stidham #3 of the Baylor Bears throws a touchdown pass turnover KD Cannon #9 of the Baylor Bears in the first quarter against the Oklahoma State Cowboys at Boone Pickens Stadium on November 21, 2015 in Stillwater, Oklahoma. (Photo by Tom Pennington/Getty Images)

Baylor will be forced to use third-team quarterback Chris Johnson for its final two regular season games against TCU, then Texas, Dec. 5.

Stidham broke a bone in his ankle last Saturday against Oklahoma State. At the time of his injury, Stidham had led his Bears to a 24-10 lead.

Johnson played a part in three touchdowns against the Cowboys in an eventual 45-35 victory.