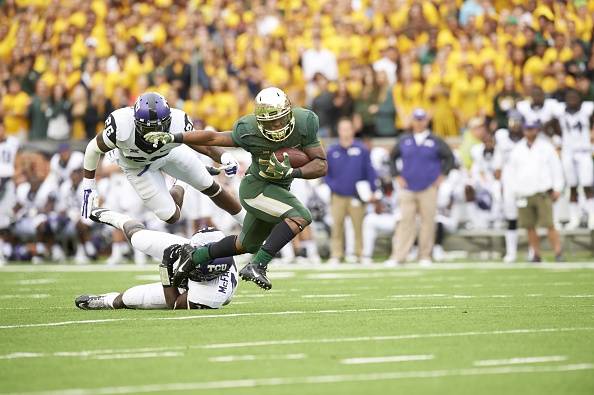 Shock Linwood is a key to making the Baylor offense hit on all cylinders.

WACO _ Baylor tailback Shock Linwood, whose running gutted  Texas a year ago, still is hobbled by an ankle injury he sustained almost two weeks ago.

It’s unclear how healthy he’ll be for Saturday’s game against Texas.

He tried to play last Friday in a double overtime loss to TCU, but gave way to Devin Chafin.

“Shock was not as good as we thought he would be,” Baylor coach Art Briles said. “He didn’t practice until last Wednesday, and he tried to go (against TCU), but he just wasn’t himself. So, we’ll see how he progresses through the week.”

Linwood is third in the Big 12 in rushing, averaging 118 yards per game.

He rushed for 148 yards against Texas last year in Austin.

The Bears like to go three deep in their tailback rotation. Briles even will line up star receiver Corey Coleman in the backfield a handful of times a game.

Linwood injured his ankle in a road win over Oklahoma State, Nov. 21.