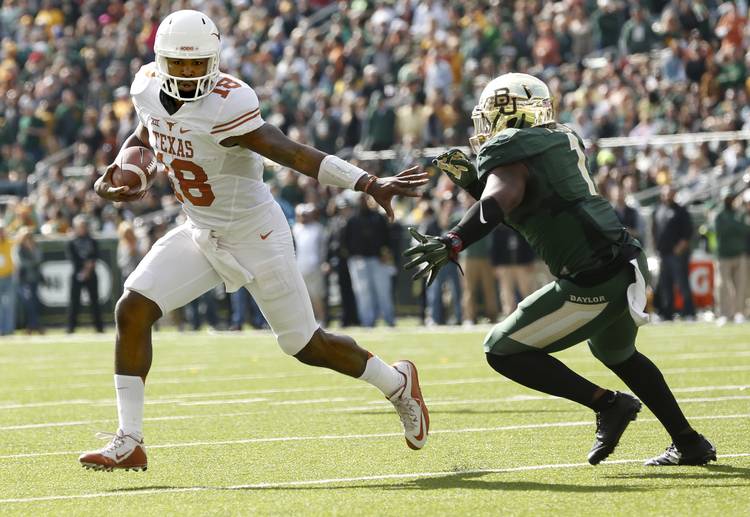 Texas quarterback Tyrone Swoopes makes a run in the first half against Baylor's Taylor Young at McLane Stadium, Dec. 5, 2015. Texas led 20-0 at the half. (JAY JANNER / AMERICAN-STATESMAN)

Texas may have won only five games this season, will not play in a bowl game, fielded its worst defense statistically in school history and has lots of question marks heading into this offseason, but the Longhorns can at least say they upset Big 12 powers Oklahoma and Baylor on the road.

The Longhorns were 21-point underdogs Saturday, but took advantage of key Baylor injuries and critical Bears turnovers to hold on to a 23-17 win at McLane Stadium. The 12th-ranked Bears, hoping for a win to get them to the Sugar Bowl, will find out their postseason destination on Selection Sunday.

The win was a welcome one for Texas, which saw a 20-0 halftime lead evaporate by 17 unanswered points from Baylor. But a big defensive play from Poona Ford saved it in the fourth quarter.

“This is a springboard for the spring now, ” head coach Charlie Strong said. “Now we have something we can build on, something we can take in to the offseason. I’m not pleased with the year we had … I don’t have an answer for this team. I wish I did. I wish each and every weekend could be like this. But I’m just so happy for our football team.”

Baylor, though, already was down its first two quarterbacks and saw its third-stringer, Chris Johnson, lost with a concussion in the first half. That left Baylor with fourth-string emergency quarterback Lynx Hawthorne, who has been a little-used receiver for most of the season. Shock Linwood left the game, too.

Texas wasn’t great in the first half, but its makeshift defense was good enough to stuff Baylor’s offense that looked anemic by not being able to throw. Tyrone Swoopes was 6 of 11 for 93 yards in the first half, producing one touchdown run and one touchdown pass. Chris Warren III, coming off the big 276-yard night against Texas Tech, had 15 carries for 66 yards.

In the first half, Hawthorne rushed for 35 yards and threw for 22. Three first-half turnovers, coupled with the injuries, led to a 20-0 Texas lead at halftime. Penalties hurt, too; the Bears were flagged nine times for 60 yards.

Baylor’s big halftime adjustment? Scrap the passing game, go with the running game. Specifically, go with a Wildcat offense. The Bears cut the lead to 20-7 on Johnny Jefferson’s

Texas faced — and failed — its gut-check moment early in the fourth quarter when the Longhorns, leading 20-10, opted to go for it on fourth-and-1 at Baylor’s 39. Swoopes, who has excelled in those short-yardage opportunities all season, was stuffed short of the marker, giving the ball back to Baylor, which was coming off back-to-back scoring drives.

The Bears answered by methodically moving down the field — again — and scoring on Hawthorne’s 8-yard dive into the endzone, cutting the lead to 20-17 with 9:40 left in the game.

Texas then started milking the clock. And converting on third downs. Twice, Swoopes found Andrew Beck on fake runs on third-and-shorts. Those first downs helped control the clock and flow of the game in Texas’ favor. Swoopes and Warren each had nice 12- and 11-yard runs as well. But on third-and-9 at Baylor’s 25 with 4:35 left, Swoopes pitched it to Warren, who stepped out of bounds three yards short of the marker.

An incompletion and a 5-yard run by Jefferson made it third-and-5 at Baylor’s 30. Jefferson was held to a 1-yard gain on third down, and Art Briles went for it on fourth-and-4 with 2:35 left. Jefferson spurted for the first down, but Poona Ford stripped the ball and then recovered it, giving Texas the ball back with 2:31 to go in Bears territory.

The Longhorns, though, went three-and-out and punted it away with 1:34 left and the Bears without any timeouts left. Michael Dickson’s pass bounced inside the 10, and Kris Boyd downed it at the 3-yard line.

Baylor, which leads the country in touchdown drives of 2 minutes or less, went with a receiver screen play (8 yards) and a big 30-yard Hawthorne keeper to reach its own 42. But an intentional grounding call made it second-and-26 with 1:02 left, at Baylor’s 26.

Corey Coleman took the direct snap out of the Wildcat for 24 yards. Paul Boyette stuffed a Baylor run for a 2-yard loss, making it fourth-and-3 from Baylor’s 49 with 32 seconds left. Hawthorne completed a short pass to KD Cannon (5 yards) for the first down.

Given new life at Texas’ 46, a double-pass play was snuffed by Texas for a 1-yard loss. Hawthorne killed the clock on second down and then threw incomplete downfield to Davion Hall; Davante Davis broke it up at Texas’ 12.

Fourth-and-11 at Texas’ 47, with 4 seconds left, it came down to one final play. Jefferson’s desperation heave fell incomplete.

Swoopes was 12 of 19 for 151 yards and he rushed for 52 yards on 10 carries. He produced two touchdowns, one rushing and one passing. Warren rushed for 106 yards on 28 carries. Daje Johnson had three catches for 51 yards, John Burt had four grabs for 21, and Caleb Bluiett had one catch — a 57-yard touchdown.

The Longhorns won despite going only 3 of 14 on third-down conversions. It helped that Baylor was even worse — 4 of 16. The Bears went for it on fourth down five times, converting two of them. Texas didn’t turn the ball over (Baylor had four).

Texas improved its advantage in its series with Baylor (75-26-4), and snapped Baylor’s three-year winning streak. It was Texas’ first win in Waco since 2009.