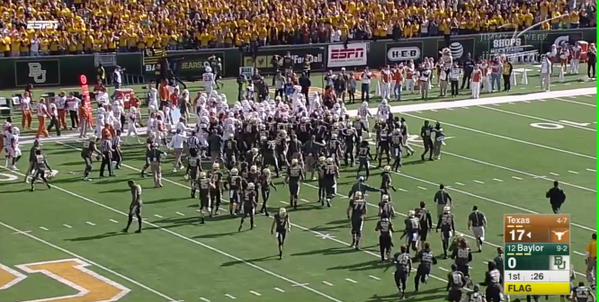 WACO — What a way to end a first quarter.

Baylor was down to its fourth-string quarterback, Lynx Hawthorne. And Hawthorne, a backup receiver, had just thrown an interception. Duke Thomas had the pick.

Hawthorne tackled Thomas near the Texas sideline. And that’s when the fireworks started.

Wildest first quarter of the year without question. And they've only played a quarter. This is very, very intense.

Where are the Baylor coaches? Half your team ran across the field. Bears are melting down with a Sugar Bowl on the line. Ejections possible.