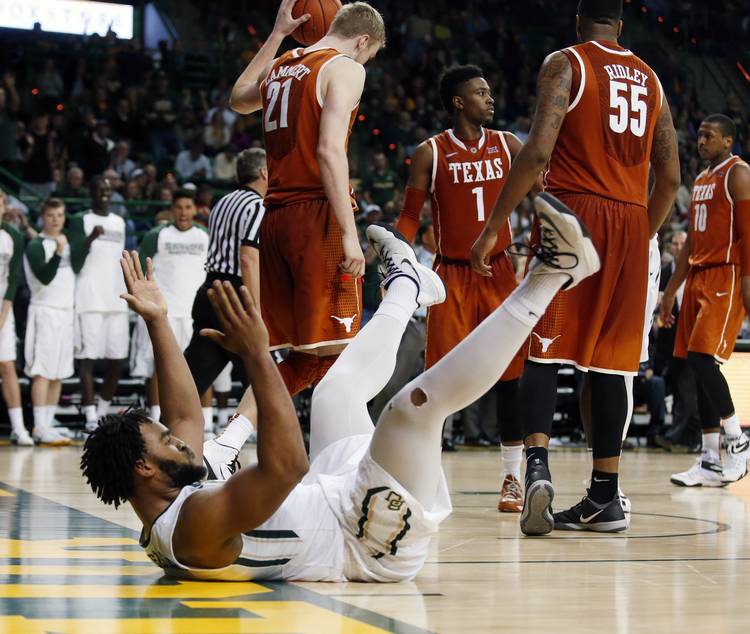 Baylor forward Rico Gathers (2) hits the floor and celebrates after being fouled by Texas forward Connor Lammert (21) in the second half of their NCAA college basketball game, Saturday, Jan. 31, 2015, in Waco, Texas. (Rod Aydelotte/Waco Tribune Herald)

Series history: In a basketball rivalry that dates back to 1906, Texas leads the all-time series 161-84. The Longhorns have captured four of the last six. UT won the last matchup in Austin, a 61-59 overtime victory marred by seven player ejections.

About the Longhorns: Texas continues to win games simply because it doesn’t give the ball away with silly turnovers. Coach Shaka Smart’s club had just six turnovers in Saturday’s win. It’s the sixth time in the last seven games the Horns have not committed double-digit turnovers. UT had only one in the first half against Vanderbilt on a shot-clock violation. … C Prince Ibeh’s free-throw percentage is skyrocketing after making 10 of 12 the last two games. He’s now up to .394 for the season. … There won’t be much time to dwell on a win or loss Monday. Texas and Baylor are scheduled for their rematch on Feb. 20 in the Big 12’s double round-robin format.

About the Bears: Coach Scott Drew’s club had a strong second half start Saturday against Georgia to win 83-73 in the Big 12/SEC Challenge. F Rico Gathers had 17 points and nine rebounds. It was Baylor’s 16th win in 17 home games this season. The only came to No. 1 Oklahoma. … Gathers, who owns the school’s rebounding record (1,068), is now 23rd on the Bears’ all-time scoring list. He grabbed 26 rebounds in two games against Texas last season. … F Taurean Prince continues to be an all-around solid player. Among Big 12 players, Prince ranks in the top 20 in scoring (15.0), rebounding (5.9) and steals (1.57). … G Al Freeman’s 3-point shooting totals have risen to 41.3 percent from 32.3.