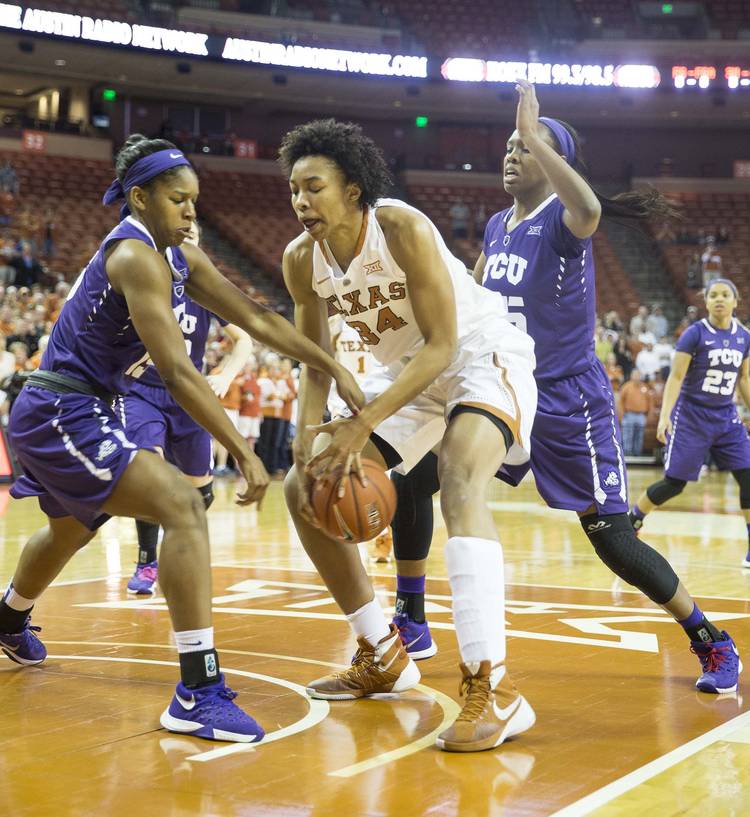 Texas's Imani Boyette fights for ball against TCU during the first half of an NCAA women's college basketball game at the Frank Erwin Center in Austin, Tex., Saturday, Feb. 27, 2016. RICARDO B. BRAZZIELL/AMERICAN-STATESMAN

The eighth-ranked Longhorns are coming off a 71-58 victory over TCU Saturday on Senior Night. Brooke McCarty scored 16 points to lead all scorers. It’s the fifth time in eight games the sophomore guard has paced Texas in scoring. McCarty and Imani Boyette have led the team in scoring nine times apiece. Boyette had one blocked shot, giving her 288 in her career. She needs two more blocks to pass Ellen Bayer for second place on the school’s all-time blocks list. The Longhorns are 10-1 on the road this year. Their lone loss is at Oklahoma. The Horns average 72 points per game, compared to 54.6 for their opponents. The Big 12 Tournament will begin Friday in Oklahoma City. Texas will have a first-round bye and open its tournament on Saturday.

The fourth-ranked Lady Bears won at least a share of their sixth straight Big 12 championship by defeating Kansas State 63-52 Saturday at Kansas State. Niya Johnson, Kristina Higgins and Chardonae Fuqua’ will be honored on BU’s senior night. That trio has an overall record of 128-11 in four years, 66-5 in conference play. The first 8,000 fans will receive gold T-shirts. Baylor is maintaining a league-leading .484 (878-1,815) shooting percentage which ranks No. 5 nationally. BU is 9-0 against ranked opponents. Baylor defeated Texas 80-67 before 8,986 fans last month as Alexis Jones scored a career-high 29 points and Nina Davis 24. It marked Baylor’s 12th straight victory over the Longhorns.