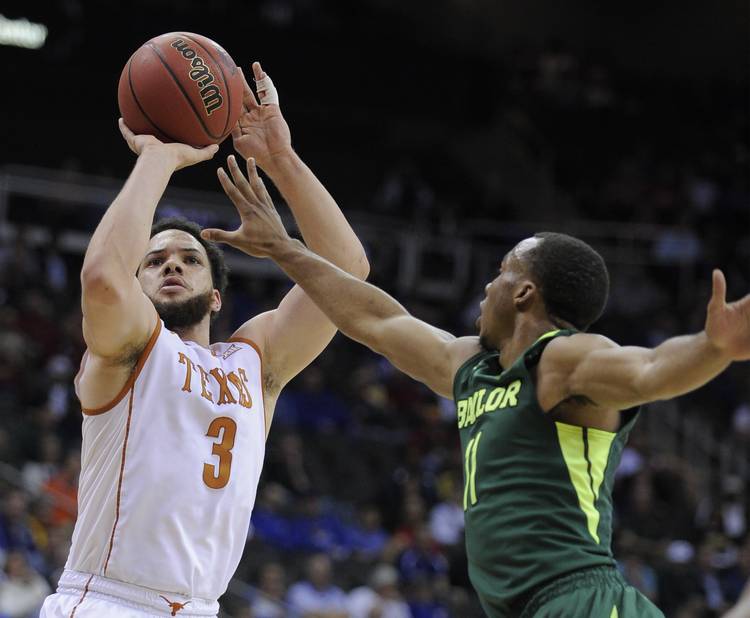 Javan Felix of the Texas Longhorns shoots against Lester Medford of the Baylor Bears in the first half during the quarterfinals of the Big 12 Basketball Tournament at Sprint Center on March 10, 2016 in Kansas City, Missouri. (Photo by Ed Zurga/Getty Images)

KANSAS CITY, Mo. — Performances like Thursday’s 75-61 loss to Baylor at the Big 12 tournament make you wonder whether Texas has topped out.

The Longhorns have a well-earned reputation as a team that peaks in February and slowly heads downward into March. This season, Texas cruised through a four-game winning streak from Jan. 26 to Feb. 6. Then came back-to-back difficult road losses, a 14-point home loss to Baylor and then a 30-point blowout loss to Kansas.

Coach Shaka Smart’s club is headed into the NCAA Tournament with a 20-12 record. But things just never really clicked at Sprint Center.

The Horns hit only 38.3 percent of their shots and 52.6 percent of their free throws. Baylor built up a 19-point lead with 11:03 remaining. Prince Ibeh’s layup cut the deficit down to eight with 5:08 remaining, but the Bears (22-10) got it back up to double figures and held on down the stretch.

Baylor’s Taurean Prince had a game-high 24 points as the Bears moved on to face the Kansas-Kansas State winner in Thursday’s semifinals.

Texas senior Connor Lammert wasn’t going to waste his final trip to Kansas City. Lammert tied his career high with 15 points on 5 of 9 shooting. He certainly kept Texas in it early. Lammert opened with a three-point play and then drained a 3-pointer. He finished the first half 4 for 6 shooting and tallied 11 points as Baylor took an 11-point lead into halftime.

Missed free throws will kill even the best teams this time of year. The Longhorns were penetrating and getting to the stripe, but they simply couldn’t convert. Texas was 4 for 10 at the free throw line in the first half while Baylor was 8 for 8. The second half was better, but the Horns finished the game 10 for 19 at the line overall.

Literally seconds before tipoff, a UT official tweeted that Cam Ridley was cleared to play. This was after the senior stood and watched his teammates go through pre-game layups. Ridley did check into the game with 6:10 remaining in the first half and earned a standing ovation from the few Texas fans in the building.

Ridley got fouled, hit two free throws 24 seconds later. He played only two minutes in the first half before coming back out. Coach Shaka Smart said Ridley would get only “single-digit minutes” on the pre-game radio show. There mere fact he was out there, working up a sweat, seems like a good sign for the NCAAs.

With all the focus on Ridley’s will-he-or-won’t-he return, it obscured the work Shaq Cleare did inside. The center was 6 of 10 shooting and finished with 12 points and three rebounds. Cleare had three solid baskets early in the second half, but the Horns were trailing by double figures at that point and couldn’t close the gap.

The cynical will see that Texas got down by 15 with 4:16 remaining in the first half and think Texas came out flat again. Well, the Longhorns were certainly playing hard — just not very good. Case in point: Isaiah Taylor and Demarcus Holland both missed wide-open reverse layups in the second half at a time Texas needed everything it could get.

The Longhorns head back to Austin and will await their fate in the NCAA Tournament. The selection show is now a two-hour ordeal, which begins at 4:30 p.m. Sunday. Most bracketologists have the Longhorns pegged as a No. 4, 5 or 6 seed in the field of 68. As for where Texas will be going, that’s anyone’s guess. The Oklahoma City subregional seems unlikely. Others stretch from Brooklyn, N.Y., to Spokane, Wash.