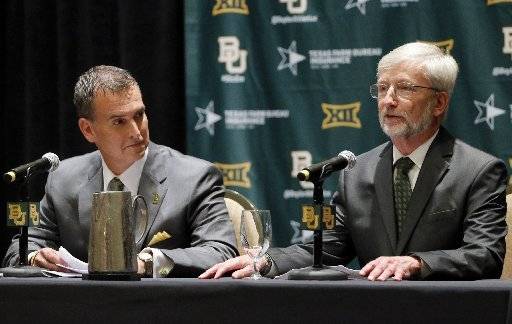 DALLAS _ Baylor interim president David Garland said Monday he’s unsure whether the NCAA will sanction the football program as a result of a sexual assault scandal that forced the firing of coach Art Briles.

“I can’t answer for the NCAA,” Garland said, “but we have communicated openly with them. We visited with them immediately. That was before I became president. We are willing to be open, and I can’t answer for what they’re going to do.”

Garland was on hand for the introductory press conference of new athletic director Mack Rhoades, who was hired fro Missouri last week.

The two were in Dallas as part of the Big 12 Conference’s annual media days. Interim Baylor coach Jim Grobe is set to speak Tuesday.

Baylor terminated Briles, May 26. School president Ken Starr was reassigned and athletic director Ian McCaw was sanctioned and placed on probation. McCaw resigned the next week.

Garland said there will be no changes to the football staff, other than Briles, for the season unless new information is revealed.

Rhoades was asked about selecting a new football coach. He has yet to meet in person with Grobe, but the two have talked on the phone. There have been reports that Baylor already has contacted Houston coach Tom Herman. Rhoades hired Herman when Rhoades was the athletic director at Houston.

Rhoades said: “I will be open minded. We will look to see how the season goes. We will begin to identify the process, potential candidates if need be. But we will have things lined up by the time the season ends if need be. Again, I go back to, you know, Coach Grobe right now is our head football coach and I’m going to get into the trenches and roll up my sleeves and work with him.”
Rhoades will visit the Baylor campus  for the first time Tuesday morning. He brought his wife, Amy, and daughters Nicolette, Natalie and Noelle to Dallas for the press conference.

His first day at the office is Aug. 15, or 11 days after the football team starts preseason training camp. Rhoades said he plans to meet with every staffer in the athletic department for at least 30 minutes.

Here’s what Rhoades said about why he took the job:

“Baylor has the resources, we have the tools to develop young people spiritually, socially, academically, and athletically. We will never compromise any of those. I know the past several months have been difficult for the Baylor family. The healing especially for those who were harmed and left vulnerable due to the actions of a few will take time and care.

“I do not pretend to have a deep level of understanding of all that has happened, but I do know if the men and women who love this university, those who came before and those here now are committed to the Christian values and come together to strengthen this university the skies are limitless. We will be committed to excellence in all areas. Over the past few days, much has been written about my motivations for coming to Waco. Let me be clear: This is an opportunity. An opportunity where I can see what can be. An opportunity to help lead one of the world’s leading Christian universities in our familiar Texas. A state where we came to love many, many years ago. A state where my grandfather, my hero, was born and raised. An opportunity to win national championships, to watch our student-athletes graduate, and to bear witness as they go on to do great things serving the world.

“Simply, I see opportunities and not challenges. The vision: I can stand up here today and make all sorts of promises about character and personal responsibility, academic achievement and winning titles; and by the way, we will do all of those things with great integrity.

“But I know that doing is better than simply telling. So we will get right to work on building a foundation, a championship culture for success at Baylor. We will focus on building championship processes, and strive for excellence in all we can do. If we all, meaning the University leaders, coaches, staff, student-athletes, students and alumni, fans and donors, if we all commit to this, I am confident the results will come.

“In closing, I am proud to be a Baylor Bear and believe we will learn and move forward from both our successes and our mistakes. We can be a positive example for others and not allow people to define us or tell us who we are. We will have the courage and the strength to acknowledge any shortcomings and ensure our athletics program is not only successful but held in high regard for how we do it, including working collaboratively with the university.

“We will rely on the values that have built this great university for over 170 years and do what is right, not some or most of the time, but all of the time.

“My dad, when I was younger, gave me a quote from Vince Lombardi. It talked about perfection is not attainable, but if we chase perfection we will capture excellence. That’s just what we’re going to do here at Baylor University. A shout out to my mom and dad. I know that they’re listening. My brothers, Bruce and George, would kill me if I didn’t mention their names. So I say hello to all of them; and, again, thank you to President Garland, to the Board of Regents and to the Baylor community for welcoming my family and I to Waco, Texas. “Sick ’em Bears!”

Big 12 takeaway: When sports and real life collide with each other