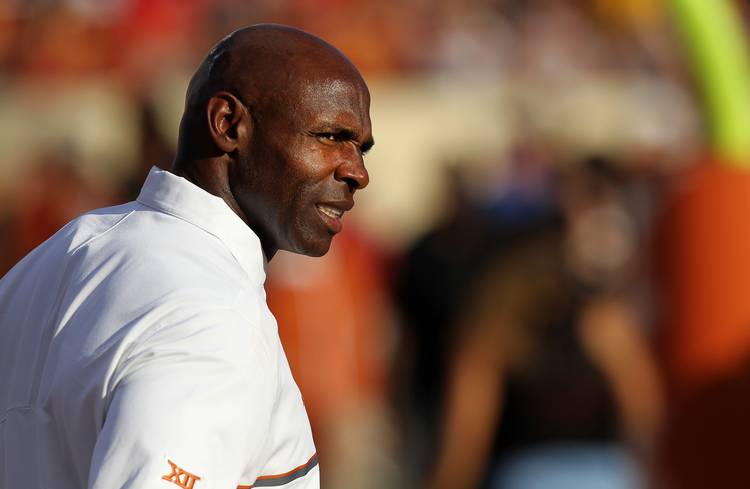 Charlie Strong’s press conference ahead of the Baylor game has come and gone.

The coach, appropriately, was dressed dark today, to match the mood. Black shirt with a Big 12 logo (not a Longhorn logo). His first words? “A very disappointing loss on Saturday.” He said the usual things — things can be corrected, he’s let his team know that there are still eight, er, seven, er, six, er five games left, and that sooner or later, his team is going to have start winning and not losing these close games.

It begins with Baylor, an ABC game that kicks off at 2:30 Saturday afternoon. It’s at DKR, which Strong seems to be banking on as his up-and-down defense prepares for Seth Russell, Shock Linwood, KD Cannon and company.

OK, on to some questions and responses.

Defensive backs Holton Hill and Davante Davis came up. Several times. Strong was asked about them specifically three times, because each time he was asked, his answer revealed just a little bit more of the onion layer:

The first Hill/Davis question was also the very first question of the press conference:

“I don’t know if it’s ‘regressed.’ They’re playing a lot on special teams and they haven’t had a lot of snaps yet, with (Kris) Boyd and (John) Bonney playing well. We’re alternating a lot of guys. The rotation is still there. They just haven’t been given a lot of snaps.”

Going back to Davis and Hill … there’s gotta be more to this story.

“It’s all about your work at practice. I tell them that’s where it always starts. Some of those games early, you saw them out there, you saw us give up some big plays. We’re looking for combinations, a tandem that can get us off the field where we’re not giving up the home runs or the throws over our head or the pass interference. Those two guys will get their chances. They’ll get their opportunity.”

And then, even later, on the fifth-to-last question of the presser:

Are the players on the same page with their position coaches? Again, the secondary, it looks like there’s a big disconnect.

“They’re always on the same page. As a coaching staff, that’s what we harp on. … Davante and Holton aren’t not doing a good job because of their relationship with their coach. They just have to play better.”

The regressions of Hill and Davis were just part of the general them of questions Strong received. Lots of big-picture and specific-player questions regarding progress. Strong used the phrase “I wouldn’t call it regressing” twice.

He also got a 1979 Ted Kennedy/60 Minutes question, when he was asked about Bill Snyder’s post-game comment that he felt Strong was “the guy” for Texas.

Are you still ‘the guy’ for this job?

“I have a lot of respect for coach Snyder. For him to say that, and the respect I have for him. I look at this job and I know this: I have a team, we just haven’t played well. But I know this team will play a lot better and I’ll just continue to develop this team and watch it move forward.”

On the sophomores who seem to be regressing:

“I don’t know if they’re regressing. You know what, other guys are pushing them. Guys that are stepping up and playing. You look at those guys last year and you’re right, they played a lot last year. But the freshmen had a good day Saturday. Talk about John Burt, you look at the job Duvernay’s doing. You stick with those guys.”

On where he sees his program’s progress at this point of his tenure:

On how hard it is to maintain the belief in the locker room:

Strong received two questions (one question and a follow-up for clarity) on what he says at staff meetings to his coaches, in terms of what’s not working.

Big-picture, at staff meetings, what do you talk about why this isn’t working?

“You’ve just gotta break it down. You look at your opportunities there. The first drive, a 14-play drive, the second drive, 13 plays. It’s not so much what someone is doing to us, it’s what we’re doing to ourselves. At the team meetings, I take them through it; this is why these things are happening to us. You know what? I’ll throw that slant route to Dorian Leonard a million times. He probably just took his eyes off it, looking upfield like he was going to score. Even the one we laid out to Armanti, he’s made that catch. When you’re placed in that position, you’ve gotta make a play.”

But week to week, why isn’t this working?

You’ve gotta challenge yourself, guys. You know where we sit at, you know how much better you can be. Are you playing at your best? Are we doing everything we possibly can to be in position, to just continue to move forward? We’ve had our issues with defense. We’re still working on those. Even the offense, even the kicking game.”

Super 8: Ranking the best Longhorns in the NBA this season