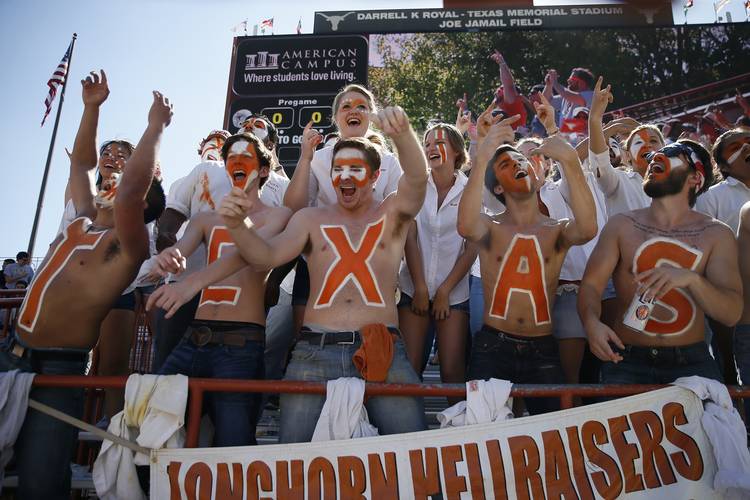 The Longhorns are playing well in all three phases of the game so far — D’Onta Foreman is already over 100 yards on the day and has two touchdown runs, the defense has produced one turnover, two sacks and a safety, and Michael Dickson has logged punts of 63, 50 and 53 yards.

Baylor came into this game with the nation’s No. 4-ranked total offense, averaging 43.7 points and 549.2 yards per game. But Texas, with its much-scrutinized defense that features a head coach for a coordinator and not one, but two coaches devoted to the secondary, has produced its best first-half defensive showing of the season, considering the competition.

Armanti Foreman has three catches for 104 yards and a touchdown.

The Longhorns own this series — overall. But recent history is another story. Texas is 75-26-4 all-time vs. Baylor, including a 45-10-2 advantage at home. But the Bears have won four of the last six — 30-22 in Austin in 2010, 48-24 in Waco in 2011, 30-10 in Waco in 2013 and 28-7 in Austin in 2014. For those who remember, that 2011 loss was against eventual Heisman winner Robert Griffin III and it came one week after the emotional Thanksgiving night win over Texas A&M in the last game of that rivalry series. And the 2013 loss was Mack Brown’s final conference game, and the outright Big 12 title was on the line. And the 2014 loss was in Charlie Strong’s first season, here at DKR, in the game that saw Tyrone Swoopes fumble it at Baylor’s 1-yard line and the Bears block a 52-yard field goal try for a touchdown the other way.

This game started the way every other one has this season: With Texas on defense. Baylor made quick work of its first drive, which ended with a 50-yard run by Seth Russell, the longest of his career. Texas has now yielded a first-drive touchdown in five of eight games.

Malik Jefferson, who finished last week’s loss in Manhattan on the bench, didn’t start. He spent the first drive on the sideline. But he got in after that. Another non-starter: Left guard Patrick Vahe, who’s yet to get into the game and spent some of the first two quarters at the end of the line of Texas players, over by Terrell Cuney, Trey Holtz and Matthew Merrick.

Talk about quick starts. There were 28 points scored within the first six minutes of the game; Texas had scored 14 points after only nine offensive snaps. But the last half of the first quarter and the first half of the second devolved into a series of punts and turnovers. Baylor went for it twice on fourth down and failed. Texas missed on its fourth-down try as well.

The Longhorns missed a golden scoring chance when Armanti Foreman was stripped of the ball after a 41-yard gain on a slant pattern. Baylor recovered at the 2, but on first down the Longhorns were awarded a safety to take a 16-14 lead.

The Bears, though, had a 13-play, 81-yard drive to close the half, which ended with a KD Cannon touchdown catch with nine seconds left.

It’s been a bad half for Blake Blackmar, the Bears’ sophomore right guard from Houston Clear Lake. It was his holding penalty in the Baylor endzone that resulted in a safety and 16-14 Texas lead. And he was flagged on Baylor’s next drive for being an ineligible receiver downfield that erased a 40-yard completion from Seth Russell to Terence Williams for 40 yards down to Texas’ 27.

1. The quick start. You’ve got to love that Texas’ first two scores were a 40-yard pass that was the exact same route that Armanti Foreman couldn’t hold on to for a touchdown in Manhattan last week, and a long 37-yard run by D’Onte Foreman that was set up by a tipped-pass interception.

2. Sterlin Gilbert. Way to throw it right back to Armanti Foreman to start things off. And seeing Swoopes at tailback generated some buzz inside DKR.

3. D’Onta Foreman. He’s off to another solid game.

4. P.J. Locke III was the most active defender in the early going, with an early pick that set up a touchdown and a broken up pass that forced a Baylor punt. And he had another third down tip in the second quarter.

3. Texas went for it on fourth-and-7 from Baylor’s 30 (that’s actually a Horns up) rather than try a 47-yard field goal, but Buechele threw a pick to Ryan Reid on the play.

The scoring, so far:

The key play: That was it. And yes, there were bad angles and missed tackles.

The key play: D’Onte Foreman had a pair of 13-yard runs, but the key play has to be the touchdown catch because it was the same route, pass and play as the long one that Armanti Foreman dropped last week at Kansas State. Talk about jumping right back onto the horse.

The key play: A tip-drill interception by P.J. Locke III was the first turnover of the game. Foreman scored on the first play of the drive.

The key play: Russell hit Poo Stricklin for 45 yards on the first play of the drive.

The key play: Blake Blackmar was the offending Bear who was flagged for the hold; it was all set up, however, by a stripped-ball fumble by Armanti Foreman at the tail end of a 41-yard pass play that the Bears recovered at the 2.

The key play: On third-and-8, Buechele found Collin Johnson on a high throw that the 6-6 receiver caught, then scampered for a 40-yard gain.