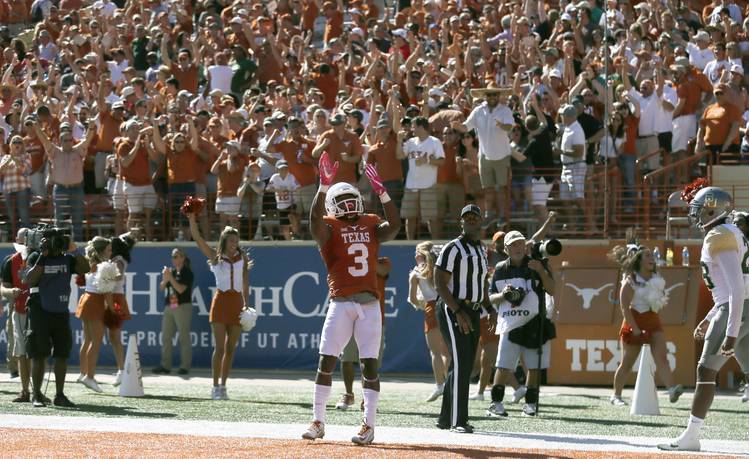 Texas scored its first touchdown off a turnover all season, following P.J. Locke III’s interception of a tipped pass, when D’Onta Foreman broke up the middle for a 37-yard scoring run en route to his 100-yard first quarter.

Locke had an interception and a fumble recovery inside the Texas 10 to thwart a fourth-quarter Baylor drive.

Texas receiver Armanti Foreman caught a skinny post route pass from Shane Buechele and ran for 43 yards, only to get stripped of the ball by Jameson Houston for a fumble recovery at the Baylor 2, but did have a touchdown and a key reception on the game-winning drive.

Baylor quarterback Seth Russell took off around left end and ran 50 yards, untouched, for his career-long run and a Bears’ touchdown on the sixth play of the game.

Russell, facing a first down at the Longhorns 34, raced around right end on a zone read, hurdled Texas safety Dylan Haines in the open field and ran for a 28-yard gain early in the fourth quarter.

On a third-and-5 at the Texas 25, Shane Buechele throws a slant pattern to Lorenzo Joe, who broke free after his only catch of the game for a 61-yard gain to the Baylor 13.

Texas linebacker Malik Jefferson and defensive end Breckyn Hager stuffed Baylor running back JaMycal Hasty on a third-and-goal from the 5 to force a Bears field goal and keep the Longhorns’ upset chances alive.