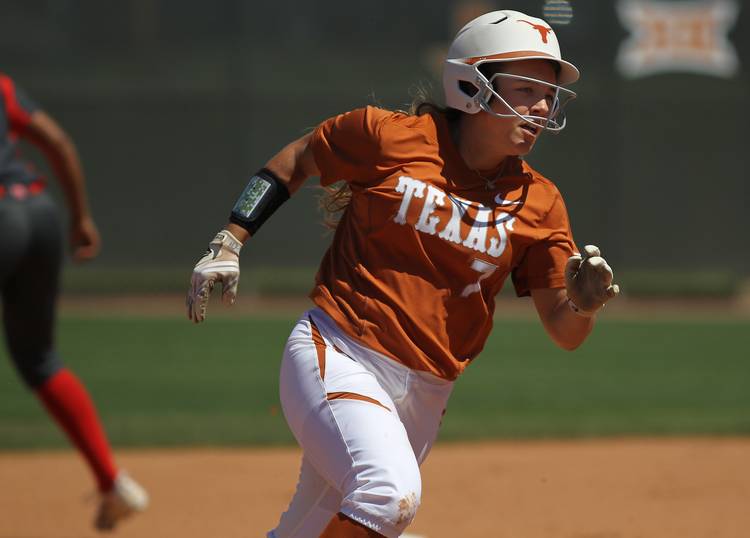 Texas' Reagan Hathaway (7) round the bases on her way to third on a triple against Houston during a NCAA softball game at McCombs Field, Sunday, April. 2, 2017. (Stephen Spillman / for AMERICAN-STATESMAN)

The 2017 season isn’t a rebuilding effort for Texas coach Connie Clark and her staff. Not even close.

On paper, all the pieces of the puzzle were in place for the Longhorns. Clark returned eight starters. Yes, eight. There are 10 upperclassmen on a roster that boasts seven seniors,  including 2014 Big 12 freshman of the year Tiarra Davis.

The pitching staff, anchored by Davis, is as deep as it’s ever been. It got a shot in the arm with the return of Erica Wright, who won 20-plus games as a freshman in 2015. Transfer Brooke Bolinger (5-2, 2.60 ERA, 16 Ks) and junior Paige von Sprecken (5-3, 1.98 ERA, 49 Ks) have been efficient. If anything, this staff just lacks that dominant every- day starter like a Blaire Luna or Cat Osterman.

The offense has been effective in recent years, but Clark hired former Oklahoma assistant Tripp McKay to ignite some power into an already solid batting order.

The offense is stale, and to make matters worse,  one of Texas’ top power hitters —  sophomore outfielder Reagan Hathaway — was lost for the season with a knee injury. It’s just another blow to an offense that needed all the help it could get.

Texas’ collective .286 batting average ranks fifth in the conference ahead of Texas Tech (.266) and last-place Iowa State (.259). The Longhorns lead the league with 11 triples (Hathaway accounted for four) but has the second fewest runs scored (181) than any team in the conference. Only Iowa State has fewer than 150. They are also next to last in slugging percentage (.406).

It’s only fair to note that freshman Taylor Ellsworth’s .475 average would rank second in the Big 12 and her .678 slugging percentage would top the conference if she had enough at bats to be eligible.

As for pitching, Texas carries the league’s third lowest ERA (2.34), but it cannot close out games. None of the Longhorns’ five pitchers have yet to record a save, and UT has given up leads five times in their opponents’ final at-bat.

The bottom line is that the offense is inefficient and the pitching staff can’t finish opponents. For a team that was picked to finish second in the Big 12, Texas is surely underachieving.

That’s all we got.

ON DECK: As mentioned, the Longhorns (20-18, 0-6) travel to Lubbock Thursday in search of their first conference win as they take on a young Texas Tech team. The Red Raiders (17-20, 4-5) are coming off a losing two of three against Kansas. Texas was swept by No. 11 Oklahoma last weekend. Here’s the upcoming schedule (all games will air on 105.3):

Recap: #Sooners sweep Texas for 12th straight win overall, 18 in a row on the road and 21 straight in Big 12 play! https://t.co/rJauOx7amQ pic.twitter.com/Frls87jv10

BIG 12 POWER POLL: Oklahoma regains the top spot in the Big 12 power poll. How do you argue against a team that has won 21 straight conference games? Oklahoma State drops to No. 2 after being swept by Texas A&M in a non-conference series, but Baylor, which has won eight straight, is on the heels of the Cowgirls.

It’s time to let the dust settle. As always, swing for the fences.