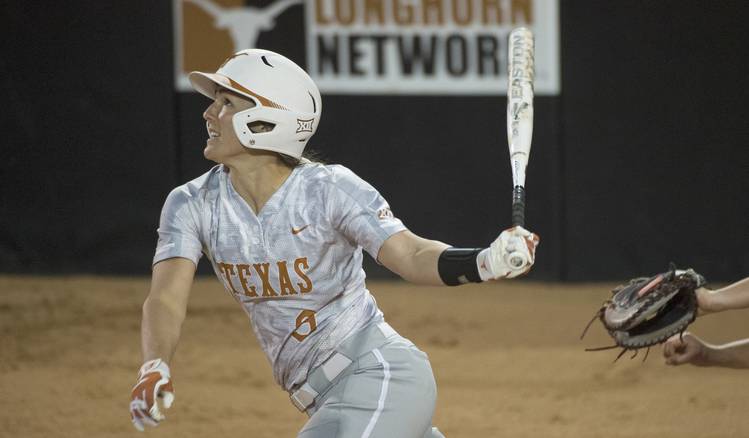 Randel Leahy hits for the Longhorns against Texas State in 2017. (Photo by Texas Athletics)

Randel Leahy showed a lot of promise as a freshman in 2015.

A nagging lower back injury derailed her sophomore season, and the Norco, Calif. native has struggled to find her freshman form where she ranked among the top five in nearly every team offensive category. In 2015 she hit .291 with 14 extra-base hits (five home runs, two triples and seven doubles), 23 RBIs and 24 runs scored. She also had a .513 slugging percentage, which ranked fourth on the team. Leahy was “On Call” to be there for Texas at the plate, just as her Kings of Leon walk-up song suggested.

Leahy is a team leader in the clubhouse, which is why head coach Connie Clark made her a team captain this season.

But it wasn’t until this past weekend during Texas’ sweep of Texas Tech and in Wednesday’s 5-0 win over Texas Southern, that Leahy showed that same promise she displayed at McCombs Field two seasons ago.

In Texas’ last three games, Leahy has hit .600 with four RBIs, two runs scored, a double and a triple.

It was a spark for an offense that finally found its grove, scoring 24 runs with nine extra-base hits, including Kelli Hanzel’s home run in game two of the series and a triple from Leahy.

Coming into the weekend, Leahy only had two multi-hit games in 31 played. She had two against Texas Tech in back-to-back games.

Leahy’s injury last year limited her playing time to 27 games and she wasn’t the same player when she returned. She had a .205 average with only two extra base hits —  one double and a home run —  along with nine RBIs and a .295 slugging percentage.

It likely helped Leahy and  the offense that they faced a pitching staff at Texas Tech that collectively holds the worst earned run average (4.36) in the Big 12. But a mental boost will do wonders for Texas at the plate.

She’s just one part Clark’s puzzle, but make no mistake, she’s a big piece of that puzzle when she contributes at the plate like she has the last three games. If Leahy can fully return to her freshman form, it will give an offense that ranks fourth in the conference with a .285 average the much-needed boost it’s looking for.

Let’s play in some dirt

That’s all we got. Hard to see the downside of a four-game winning streak.

ON DECK: The Longhorns (24-18, 3-6 Big 12) return to McCombs Field this weekend to host last-place Iowa State. The Cyclones (16-31, 1-11) have never beaten Texas, but did shock Oklahoma State on April 15 with a 10-9 victory in Ames, Iowa for their first conference win and the Cowgirls’ first conference loss. Texas swept Texas Tech. Here’s the upcoming schedule (all games will air on the Longhorn Network and 105.3):

WE SEE YOU K WASH! Texas softball's @kaitlynbreann25 has been named the Big 12's Player of the Week for April 18! https://t.co/cUDm8l1uWZ pic.twitter.com/lulPj1uTgD

BIG 12 POWER POLL: Oklahoma is taking an 18-game winning streak into its series with Baylor. The Sooners remain atop of the Big 12 power poll while Baylor and Oklahoma State swap places and Texas leapfrogs Texas Tech and Kansas to take over the fourth spot.