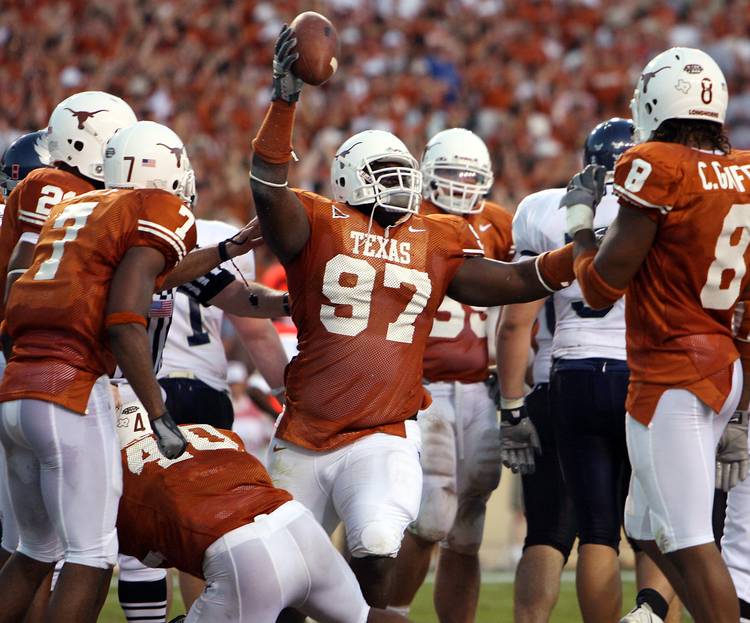 Deborah Cannon/American-Statesman Texas's Frank Okam celebrates after recovering a fumble for a touchdown during the second quarter against Rice on Saturday, September 17, 2005.

Former Texas star defensive tackle Frank Okam, who was a member of the 2005 national championship team, has been hired by Baylor as an assistant coach.

“Frank is a living embodiment of everything the young men in our program should want to accomplish,” Rhule said in a statement. “He’s a college graduate, an All-American, a Big 12 champion, a national champion, a NFL draft pick and then he continued life after football earning his master’s degree from Rice and is now one of the top young football coaches in the country.

“We are excited to have Coach Okam on staff and for him to mentor our defensive line group and help take them to the next level.”

Okam had coached at Rice the past four seasons. He was a graduate assistant for the first two, then was promoted to coach the Owls’ defensive line.

“For me this has been a great experience,” Okam said in a statement. “Personally, having the chance to come to a school like Baylor in the Big 12 is really exciting for myself and my career. I want to thank Coach Rhule for the opportunity he has given me and this chance to take the next step in my career.”

Okam played for Texas from 2004-07. He was a fifth-round draft pick of the Houston Texans in 2008. He played there for three seasons. He also played for Seattle, Tampa Bay and the New York Giants.

While at Texas, Okam was a freshman All-American and a two-time All Big 12 selection.

Rhule is in his second season at Baylor.