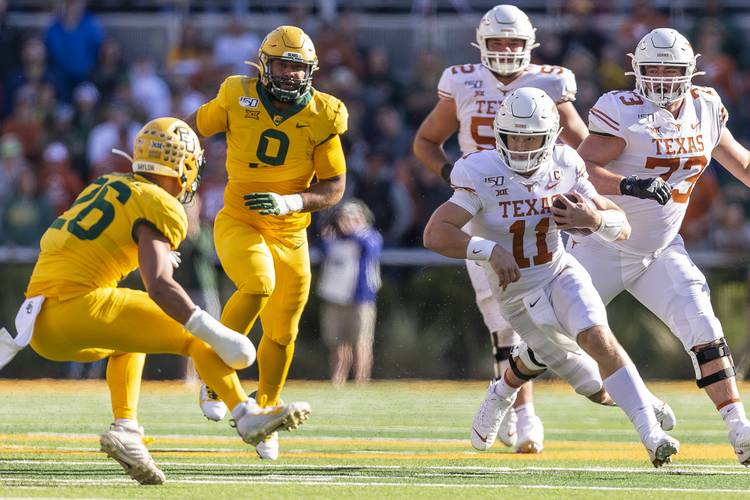 Strange game. Both defenses are making it tough days for either Sam Ehlinger or Charlie Brewer to establish either offense. Baylor committed a turnover inside the red zone, both defenses have frustrated the quarterbacks and both punters are having standout afternoons. And then, when it looked like the Horns were content to run out the clock at the end of the half, Keaontay Ingram burst free for a 68-yard run down to Baylor’s 30 with five seconds left.

1. Baylor still hasn’t allowed a touchdown on an opponent’s opening drive all season.

3. John Lovett’s 28-yard touchdown run in the opening minute of the second quarter not only put Baylor on the scoreboard, but it snapped a rough offensive stretch of drives for the Bears. Over their previous seven drives, going back to the Oklahoma game, the Bears had four punts, three three-and-outs and three turnovers.

4. Sam Ehlinger is 9 of 13 for 70 yards, and has rushed for 22 yards on nine carries. He converted a third-and-1 on UT’s first drive with an 8-yard run and popped off a 15-yarder on the second drive. Keaontay Ingram started slowly (18 yards on six carries, and 13 of those 18 yards were on one run) but exploded late. He has 86 yards on seven carries, but walked off limping after that 68-yarder. Devin Duvernay has four catches but for only 12 yards. He’s being corralled. Brennan Eagles has two catches for 26 yards, both for first downs.

7. Easily one of the highlight plays of the half: A first-and-10 near disaster as Zach Shackelford’s snap sailed right past Ehlinger. Ehlinger caught up with it, moved to his right to buy him some time and then sailed it toward the sideline. It looked as if he might have been throwing it away, but Malcolm Epps wet high and snagged it, then stumbled forward for a 7-yard gain.

Welcome back, Chris Brown. The Longhorns defensive back, who had missed games but returned for last week’s game at Iowa State, recovered a fumble on Baylor’s first drive. D’Shawn Jamison, who’s had a string of recent nice games, caused the fumble. … Chris Naggar is averaging 33.8 yards a punt; two of his first efforts backed Baylor up at its 10 and 14.

The Longhorns have won the last four meetings. Texas will get the ball to start the third quarter.

Texas’ season limps along in 24-10 strugglefest at Baylor