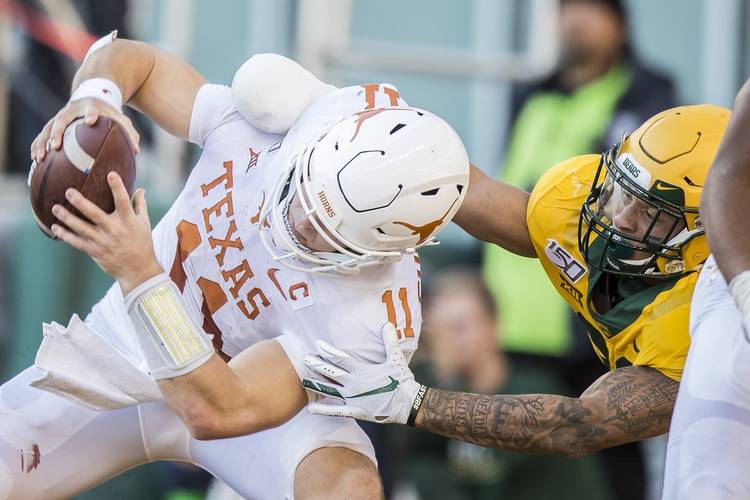 It’s all over at McLane Stadium in Waco. The Longhorns — 5.5-point underdogs today — have lost to No. 14 Baylor, 24-10. Don’t let the final score deceive you. It’s wasn’t really two-touchdown close and the Longhorns scored a touchdown with one second left in the game.

Texas’ four-game winning streak against the Bears has been snapped.

Also snapped: Any remaining hope of the Longhorns sneaking their way back into the Big 12 championship game. There was a complicated series of events — some possible, some unlikely — that had to happen to get Texas back to Arlinigton. But that dream scenario started with a win over Baylor. And ended with a loss at Baylor.

So now, how the final week plays out will determine whether Texas ends up in the Texas Bowl or somewhere else.

Remember when third downs were nearly as good as it gets for Texas, which ranked in the top five in third-down conversions nearly all season? That former strength is now an issue; Texas was 6 of 17 on third downs in the 23-21 loss in Ames last week and was just 4 of 13 today. That’s a 33% success rate these last two weeks. Collin Johnson missed another game with a sore hamstring and Keaontay Ingram was lost to an ankle at the tail end of a 68-yard gain. And it’s not just why Texas lost, but how Texas lost. The Horns looked flat, struggled to run the ball again and didn’t look like a team fighting for its season.

It’s the Bears’ year. They’re one 2-point conversion away from being in the CFP conversation. Matt Rhule has made a lot of right calls in rebuilding this program the right way. Charlie Brewer is an effective quarterback that makes plays and few mistakes. The defense has shined all season and continued to do so on Saturday; the Bears sacked Ehlinger five times and picked him off once. Denzel Mims had a big night (7-125-1).

Rhule has evened his record at Baylor at 18-18.

Depends on what’s really ailing this team, and whether it’s also the program that’s ailing as well. This season began with expectations of returning to the Big 12 championship game and, with opportunity games there against LSU and Oklahoma, perhaps even the College Football Playoff. Sam Ehlinger was among an elite group of national quarterbacks coming off his Sugar Bowl MVP sophomore season and was generating a little preseason Heisman buzz. But now, we’re talking about a 6-5 team that looks like it’s headed to another Texas Bowl.

Coming off a 10-4 year and a New Year’s Day bowl win over Georgia, that’s a bad look.

1. In the Sam Ehlinger vs. Charlie Brewer matchup, score this one for Lake Travis. Ehlinger, playing without starting receiver Collin Johnson and losing his starting running back at halftime, was 22 of 37 for 200 yards and one interception. He was sacked five times, made some plays with his legs, took some big hits and never seemed very comfortable. Brewer, meanwhile, was 16 of 25 for 221 yards and a touchdown, and 75 rushing yards and another touchdown. In the second half, he made plays when the Bears needed him to, including a couple of touchdowns and a fourth-down conversion. He left the game after a big hit in the fourth.

2. Ehlinger underthrew a downfield shot to Brennan Eagles, who was open for a moment, and the Bears picked it off to kill what was a promising drive as Texas trailed 21-3. It was the seventh pick for Ehlinger in the last five games.

3. What will this offense look like next year with Johnson and Duvernay both gone? Malcolm Epps made a couple of nice grabs and Brennan Eagles has looked good all season. Jake Smith, Duvernay’s backup at the slot, had two catches late in the game. That’s notable, because since the Kansas game on Oct. 19, when Smith had four catches for 34 yards and a touchdown, this is how his season had gone:

4. Speaking of invisible men, it doesn’t look like we’ll see Jordan Whittington again until 2020. Even with Ingram out, it was Roschon Johnson who took care of all the snaps.

5. Eight minutes left in the game, by the way, was when things went really south for this season. On one play, Zach Shackelford was flagged 15 yards for a personal and then Parker Braun was flagged for unsportsmanlike conduct and was escorted off the field.

On the very next play — third-and-34 — James Lynch lit up Ehlinger to force a punt.

6. A few minutes later, Derek Kerstetter was flagged 15 yards for unsportsmanlike conduct, too.

7. Lynch, the former Round Rock star who was Matt Rhule’s first recruiting visit when Rhule took over back in 2016, broke Shawn Oakman’s school record for career sacks. He dropped Ehlinger in the third quarter, putting him at 18.5 for his career. And he’s just a junior.

Next up for Texas: Texas Tech

The Longhorns and Red Raiders wrap up their seasons at Royal-Memorial Stadium next Friday, the day after Thanksgiving. It’s an 11 a.m. kickoff and will be on Fox.

James Lynch took Ehling er down on UT’s first drive of the third quarter. That made him Baylor’s career sacks leader, with 18.5. And he’s just a junior.

Bewer has 8 rushing TDs in the last 6 games. Had his 10th of the season in the third quarter to put Baylor up 14-3.