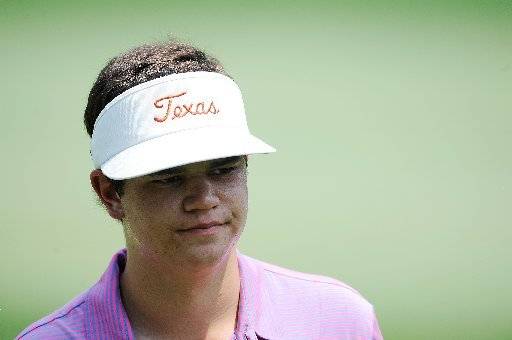 Texas junior Beau Hossler shot a career low 7-under par 65 to tie for the lead at the Nike Golf Collegiate Invitational on Monday in Portland, Oregon.

Hossler had five birdies and one eagle in a bogey free round at Pumpkin Ridge’s Witch Hollow Course to tie Duke’s Max Greyserman at 10 under par. Hossler carded a 3-under par 68 in the first round at the par 71 Ghost Creek course.

Hossler started the round with birdies on the par-3 tenth and par-5 eleventh. He eagled the par-5 fourteenth and had three birdies on the front nine.

The ninth-ranked Longhorns moved up to fifth-place in the team standings after shooting a 10-under par 278 in the second round. Texas is 13 strokes behind leader Wake Forest. The Demon Deacons shot nine under in the second round. Southern Cal is in second place at 24 under par and Duke is third at 22 under.

Texas sophomore Doug Ghim shot three under par with four birdies and one bogey and is tied for 35th place at 1 under par.

UT’s Gavin Hall had three birdies and an eagle, but had a triple bogey on the par-3 twelfth and finished at 2 under par. Hall is tied for 28th place at two under. Texas’ Scottie Scheffler was two over par in the second round and is tied for 43rd place at even par.

Women’s golf: The Longhorns shot 4-over par in the second round of the Jim West Challenge on Monday in Boerne and are tied for seventh place at 10 over par.

Ken State is in the lead at 10 under par after shooting seven under par in the second round. Texas A&M is in second at 6 under par.

Texas Tech’s Gabby Barker moved up to first place after a shooting a 4-under par 68. Texas A&M’s Maddie Szeryk is a shot behind after carding an even par 72.

Texas junior Haley Mills had five birdies, two bogeys and two double bogeys to finish at one over par. Mills is tied for 15th place at even par. UT’s Sophia Schubert and freshman Maddie Luitwieler shot even par 72s.  Schubert is in 19th place at 2 over par and Luitwieler is tied for 29th at four over. Texas’ Tezira Abe shot a three over par 75 and Julia beck was four over par.