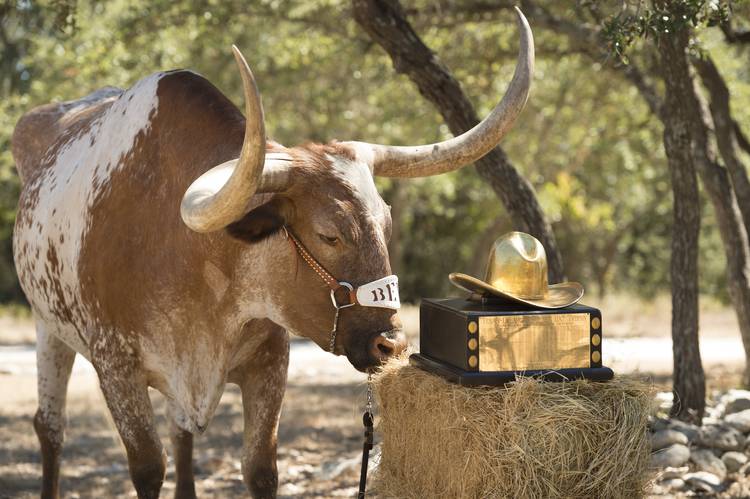 Bevo XIV got one final look at the Golden Hat Trophy, which goes to the winner of the Texas-OU game. (Jim Sigmon/University of Texas Athletics Photography)

At times, traveling with Bevo is like rolling with a celebrity.

The University of Texas live sideline mascot, first introduced in 1916, is arguably one of the most photographed animals in the world. Fortunately for school officials, Bevo XIV was straight from central casting.

“You pull over for gasoline and you’re going to be there for an hour,” said Ricky Brennes, Bevo’s day-to-day handler. “People want to come over, ask questions and get photos.”

Bevo XIV didn’t seem right on Monday, Oct. 5, six days before the annual Texas-Oklahoma game, Brennes said. He wasn’t responding to food like normal, seemed lethargic and tired. Doctors soon discovered that Sunrise Studly had bovine leukemia virus, which is found in cattle but has recently been genetically linked to human breast cancer.

On Friday, Bevo XIV died while resting at the home of his owners, Betty and John T. Baker of Liberty Hill.

A message on Texas A&M’s official Twitter account read, “Condolences to @UTAustin on the passing of @BEVO_XIV. Mascots are truly special.”

The instantly-recognizable longhorn steer became the Longhorns’ mascot in 2004 at the age of 2.

Over the years, the Texas football team compiled a 106-41 record with Bevo XIV on the sideline and captured the 2005 national championship. His postseason record was an impressive 7-3, the majority of it earned under former coach Mack Brown.

Bevo XIV even took over the Longhorn Network all by himself last Christmas. The network followed Bevo around while he grazed. The five-hour, multi-camera broadcast featured holiday music in one of the most captivating Christmas Day broadcasts imaginable.

Bevo is also the centerpiece of the Neighborhood Longhorns, a charity that’s raised more than $250,000 the last two years for inner-city youth educational programs

“It’s hard for you to ever take for granted each time someone comes to see him for the first time,” said Brennes, executive director of the Silver Spurs. “You can see how excited they are.”

A search for Bevo XV is already underway. Brennes said Silver Spurs officials are meeting on Saturday to begin preliminary talks. There is no backup Bevo at the ready, Brennes said.

It seems doubtful the Silver Spurs will pick another animal qualified to become Bevo before the end of the 2015 regular season. It comes down to the right look and how the animal behaves in various situations, including those involving capacity crowds with a cannon blasting in the background.

Popular lore has it that Bevo is drugged before games. That’s not true, Brennes said. Longhorns are typically a docile animal.

“Temperament and disposition are huge factors,” Brennes said. “We take Bevo around a lot of people. If the steer is one that’s not been socialized or would react negatively in those environments, then that’s not going to be Bevo.”

Mack Brown on South Carolina job: I’d love to talk to them