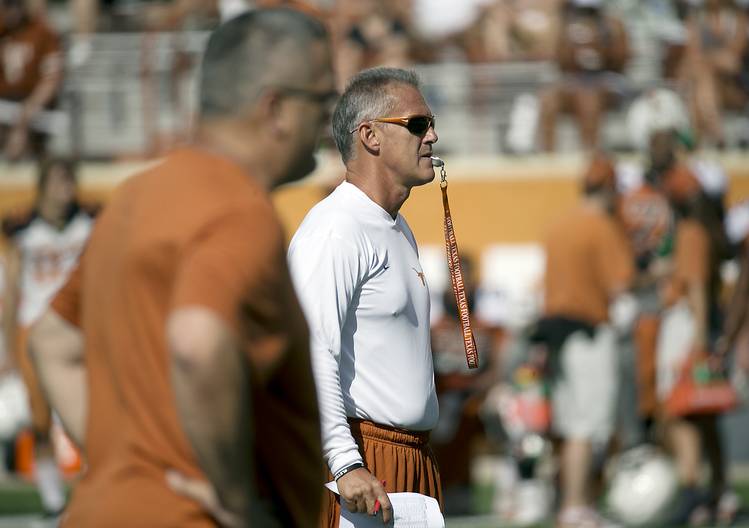 Wide receivers coach Jay Norvell, who joined the staff this offseason after spending seven years at Oklahoma, will call the plays and run the offense going forward.

Strong stressed that Watson will remain on staff to coach the quarterbacks. Offensive coordinator Joe Wickline will remain the team’s offensive line coach. But Norvell will call plays by himself, Strong said.

Despite this announcement, Strong said he has not determined whether Tyrone Swoopes or redshirt freshman Jerrod Heard will start Saturday against the Owls (1-0). That decision will come later this week, Strong said.

“What was key is we have to get this program on track,” Strong said after Tuesday’s practice. “We have to do a better job coaching. We’ve got to get our players better prepared, and there’s no reason for us to go out and perform at the level we’ve been performing. There’s no reason at all.

Watson was scheduled to meet with reporters after Tuesday’s practice, as is custom. But UT officials scrambled to set up the interview room for the head coach. Strong emerged from a side door and broke the news.

“You have to set aside your friendship,” Strong said, “and you always have to do what’s best for the university.”

Strong and Watson have been together since their Louisville days. Strong fired his offensive coordinator four games into the 2011 season and promoted Watson, then the Cardinals’ quarterback coach, to top play-caller.

Watson finished the 2011 season and then assumed the offensive coordinator title at Louisville in 2012 and 2013. Along the way, quarterback Teddy Bridgewater became a sensational quarterback and future first-round draft pick.

But the offense and quarterback play hasn’t clicked since the duo came to Texas. The Longhorns averaged 337.3 yards per game last season, the second-worst total in the Big 12. Swoopes struggled behind a thin offensive line and eventually led the Horns to a 6-7 finish.

It was thought this season would be different as the Horns went to a spread offense. That was something Watson wasn’t totally comfortable with as the 55-year-old was raised in the West Coast passing system, which relies on short, accurate passes.

What was billed as a new offense looked like the same old mess in last Saturday’s 38-3 loss at Notre Dame. Texas managed just 163 yards and ranks last nationally (123 teams) in total offense.

“It’s about productivity,” Strong said. “I just sat down and came to that conclusion that we need better and have to do better. It’s a tough decision since Shawn and I and Joe, we’ve been friends for a long time. But we have to do what’s best for the program right now.”

What possibly infuriated Strong was that senior running back Johnathan Gray had only eight carries for 40 yards against the Irish. Strong believes Gray is a premier ball-carrier, and the coach wants to establish a down-hill running game.

Bohls: Removing Watson from calling plays was the Strong move