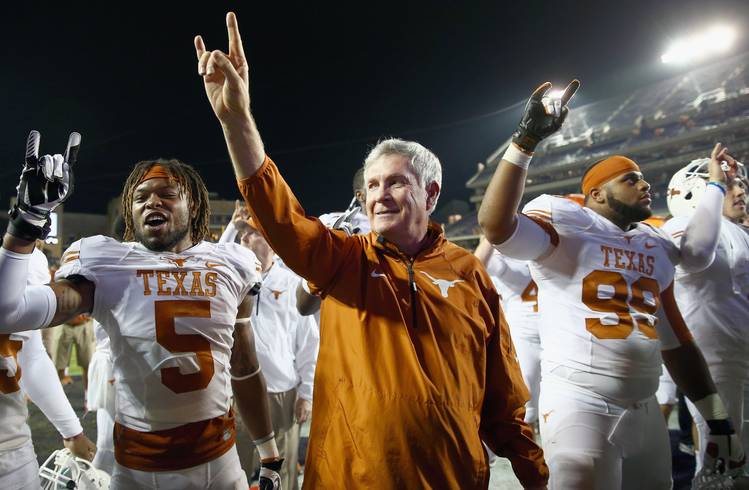 Former Texas coach Mack Brown said he feels no real responsibility for the current state of the program since considering he left after the 2013 season.

In an interview with the San Antonio Express-News, Brown expounded on his TV work with ESPN and admitted that current UT coach Charlie Strong has kicked around the possibility of Brown speaking to his former team.

As for the current state of the team, Brown told the Express-News he doesn’t feel any responsibility.

“I really don’t. I think if that was the case, our first year, we would have had to give all the credit to John Mackovic,” Brown said. “So, to me, that’s happens when you change. Change is very unique. Sometimes it works great immediately. Sometimes it takes awhile. Last year, it didn’t work. There were suspensions, changes, injuries and transfers.

“I do think in talking to Coach Strong that he feels better … that he and the kids are on the same page and they are moving forward,” he added. “They think they can have a good year.”

Brown told the newspaper he doesn’t regret the way he left the Longhorns. Texas was 8-5 in Brown’s final season and had a chance to win the Big 12 title on the final day of the regular season.

“I think I finished like I wanted to at Texas,” Brown said. “People would say you didn’t win the last year and people were upset and wanted you to leave. But none of that is a factor for me.

“I felt like that 16 years is a long time to stay anywhere. Not many people can stay that long at a place like Texas. Sally said it went through four (U.S.) presidential terms. But at the same time, I was OK with it.

“I knew enough about it that I could have forced my way to stay. But at the same time unless everybody is pulling together, it doesn’t work. I knew not everybody was pulling together. There were some people who weren’t satisfied in positions of authority and, for that reason, I thought it was time to go.”

To read the full article from the Express-News, click here.

Frosh Malik Jefferson vs Frosh Derrick Johnson: Who ya got?