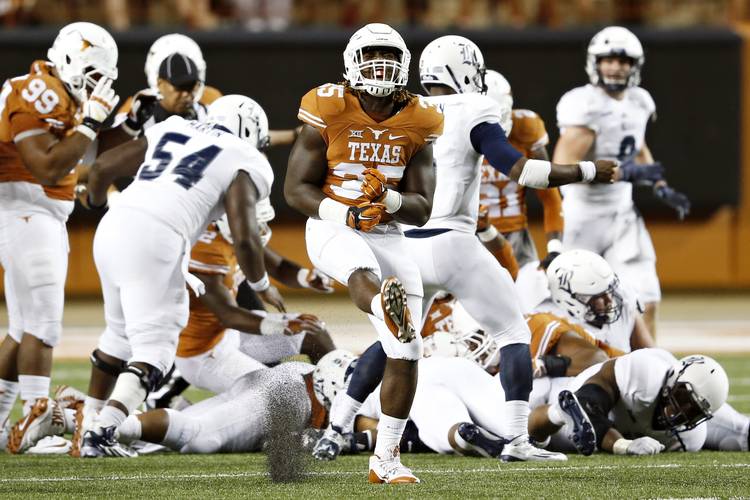 UT linebacker Edwin Freeman celebrates after a good play during the game against Rice at Royal-Memorial Stadium on Saturday. JAY JANNER / AMERICAN-STATESMAN

Texas players and staff weren’t thrilled with the way Saturday’s Rice game played out, save for all their big plays. That’s because the defense was on the field nearly the entire night.

“We missed so many tackles,” coach Charlie Strong said. “I told (defensive coordinator) Vance (Bedford) during the game, ‘I guarantee you, we have 20 missed tackles or more. And sacks, God almighty, what did we miss, about 10 sacks?

“We’ve got to do a better job with those things and find a way to just get off the field on third down.”

Rice converted 8 of 12 third-down plays in the first half and 14 of 21 for the game, a 67-percent clip that normally spells doom.

Those numbers were mitigated, of course, by the defense racking up four turnovers,  notching a touchdown on Malik Jefferson’s 26-yard scoop and score and rolling up a school-record 175 yards in punt returns.

“Basically, Notre Dame and Rice ran it down our throats,” said Jefferson, the freshman linebacker. “Everybody will try that now.”

“Third down is a problem,” defensive tackle Hassan Ridgeway said. “Somebody has got to make a play. We get close a lot of times, but don’t get it done. We’ve got to start taking it personally. Other teams are making a statement that they can come right at us and make plays on third down, and we can’t defend them.”

Jefferson said Rice, a much smaller team than Notre Dame, had some deception in their game with elusive quarterback Driphus Jackson.

“They were slow-playing us,” he said. “They’d look like they were in a run and then throw quick passes. Or the other way around.”

Rice coach David Bailiff was proud of his offensive line.

“They performed admirably,” Bailiff said. “You saw how many holes were created. We were physical up front. We controlled things. You just can’t give the ball away so many times and allow three big punt returns.”

Jackson said, “Everything we did was self-inflicted. We made five turnovers, and that’s something we’ve never done before.”

Texas, meanwhile, will try to plug its leaks.

“We’re happy with the win,” Ridgeway said, “but we obviously have to tighten it up a lot.”

Golden: Three nuggets from the first half