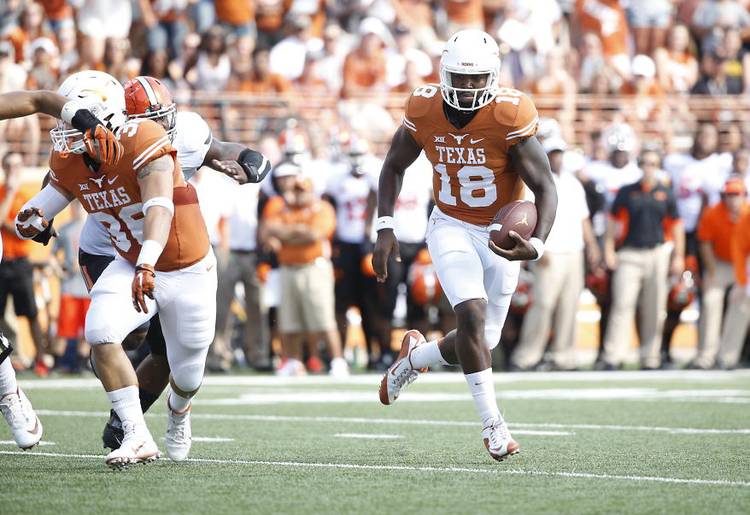 Jerrod Heard hasn’t been electric. But he has been efficient. He’s 7 of 10 for 84 yards and has added 40 yards rushing on seven carries. Four different pass catchers have been on the receiving end of his throws, including a big 47-yarder by Marcus Johnson, who’s seeing his first action since South Bend.

Daje Johnson has been largely held in check. He has two grabs for 6 yards. He’s averaging 22 yards on three kickoff returns. Hasn’t fielded a punt yet.

Four of the five starting offensive linemen have committed costly penalties. Taylor Doyle (holding) negated a 14-yard run from Heard. Connor Williams (holding) moved Texas out from within OSU’s 10-yard line. Kent Perkins (false start) turned a third-and-12 from the 21 into a third-and-17 from the 26 — and subsequent field goal. And Patrick Vahe (holding) called back a D’Onta Foreman touchdown.

Hassan Ridgeway delivered the defense’s biggest play, a 33-yard scoop-and-run fumble return for a touchdown on a play similar to the one Malik Jefferson scored on against Rice.

Speaking of Jefferson, No. 46 has had a quiet afternoon.

So has John Burt. No catches.

Johnathan Gray has rushed for 55 yards on nine carries.

Over on the OSU side, Mason Rudolph is 14 of 18 for 191 yards and a touchdown. He’s been sacked twice and fumbled once. Chris Carson is being held in check; he’s rushed 12 times for 39 yards (a 3.2 average) and really has broken only one run for a big gain — 13 yards.

Nick Rose has put last week behind him, apparently. He’s kicked two field goals from 41 and 46 yards out.