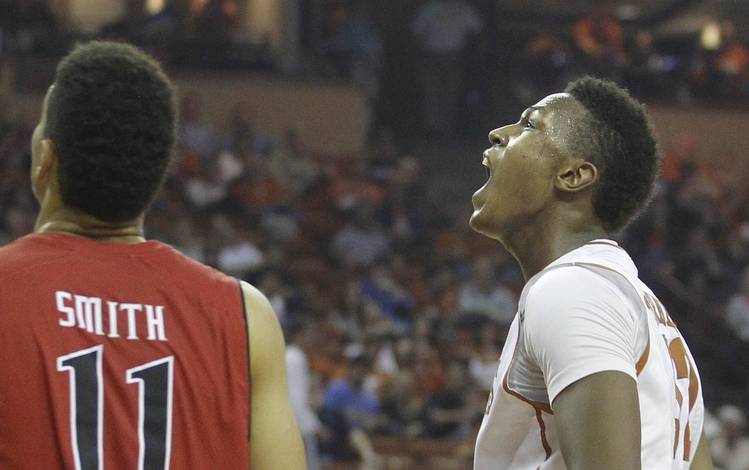 The University of Texas has produced 41 NBA players since 1957 — the first year the program started tracking its NBA-bound players. Fourteen of those players were first-round picks and seven of those players are currently on — or striving to be on— a NBA roster this year.

So who are the current former Longhorns in the NBA— or at least competing for a roster spot this month?

For part one, head here.

And don’t miss a gallery of all these players from their days in Austin to their time in the league.

The first, and only, four-year player on the list, Holmes arrived in Austin from Antonian College Prep in 2011. His father, Daryl, played football for Nebraska and Holmes averaged 23.4 points per game for Antonian his senior season, where he led the TAPPS program to a 16-13 mark and a state semifinals appearance.

Holmes never averaged less than 20 minutes per game for the Longhorns in four years, scoring more than 1,000 points and was a second-team All-Big 12 forward in 2014. He was honorable mention All-Big 12 as a senior, averaging 10.3 points per game and 6.1 rebounds.

Holmes went undrafted in the 2015 NBA draft, but signed a contract with the Los Angeles Lakers in August after playing summer ball for the Boston Celtics.

Joseph started all 36 games he played for Texas, hitting a memorable shot against North Carolina in December that capped a 21-point performance.

But UT’s 2011 NCAA Tournament run ended when Arizona hit a game-winning shot in the third round of the NCAA tournament to end Texas’ season. The Longhorns finished 28-8 and second in the Big 12 that spring.

Joseph declared early and was drafted 29th overall by the San Antonio Spurs. He struggled to stick with the NBA club and had three different stints with the Austin Toros/Spurs (the Spurs’ NBA DL team). However, Joseph was on the Spurs roster in 2014 when the team won the NBA title.

Despite career averages of 5.2 points per game and 1.9 assists per game, including a 2014-15 season that included a 6.8 point per game average, Joseph scored big this summer. In July he signed a four-year $30 million contract with his hometown Toronto Raptors.

Thompson was part of the same prep school and UT team as Joseph, and like Joseph is a Toronto native.

Unlike Joseph, Thompson was a lottery pick in the NBA and is now at the center of one of 2015’s most talked about offseason stories.

While at Texas, Thompson averaged 13.1 points per game and 7.8 rebounds per game.

He declared after one season and the Cleveland Cavaliers, reeling after the loss of Lebron James, drafted him fourth overall — a few picks after Cleveland’s other lottery pick, Kyrie Irving. Thompson’s up-and-down pro career took off in 2014-15, when James returned to Cleveland, and Thompson averaged 10.8 rebounds and 9.6 points per game in the playoffs

Now a NBA rebounding machine, Thompson is seeking a near max-level contract with the Cavs and has yet to sign with Cleveland — despite sharing the same agent as Cleveland sports idol, Lebron James.

Tucker arrived from North Carolina’s Enloe High School and quickly became one of the top players on the squad.

Tucker was a Big 12 first team All-freshman selection and was the 2006 Big 12 Player of the Year. He averaged 16.1 points per game as a junior and finished with a career average of 13.7 points. He helped the Longhorns to a Sweet 16 and Elite Eight appearance during his career.

Tucker was a second-round pick by the Toronto Raptors after skipping his senior season, but struggled to catch on and was waived in 2007.

After a rousing overseas basketball career, where he was named Israeli Basketball Super League MVP in 2008, he returned to the NBA in 2012 and has stuck.

Of course,  one of Tucker’s best contributions to Texas is also this promo photo for the Maui Classic in 2004. Hang 10, Brad Buckman!

The youngest and newest first-round pick added to Texas basketball history, the McDonald’s All-American center picked Texas over Kansas in the spring of 2014 and raised the Longhorns’ expectation level to heights not seen since, well, the last 6-11 freshman superstar arrived on campus (Kevin Durant).

The Bedford native played high school ball for Euless Trinity, averaging 18.1 points per game and led the Trojans to a 24-7 record.

At Texas, Turner’s freshman year was up-and-down. While he earned 2015 Big 12 Freshman of the Year honors, he started just seven games, averaged 10.1 points and averaged 6.5 rebounds during Texas’ somewhat disappointing 24-11, third-place finish in the Big 12 and third-round tournament exit. He would be coach Rick Barnes’ last McDonald’s All-American at Texas.

Turner declared for the NBA and was selected 11th overall by the Indiana Pacers in June.