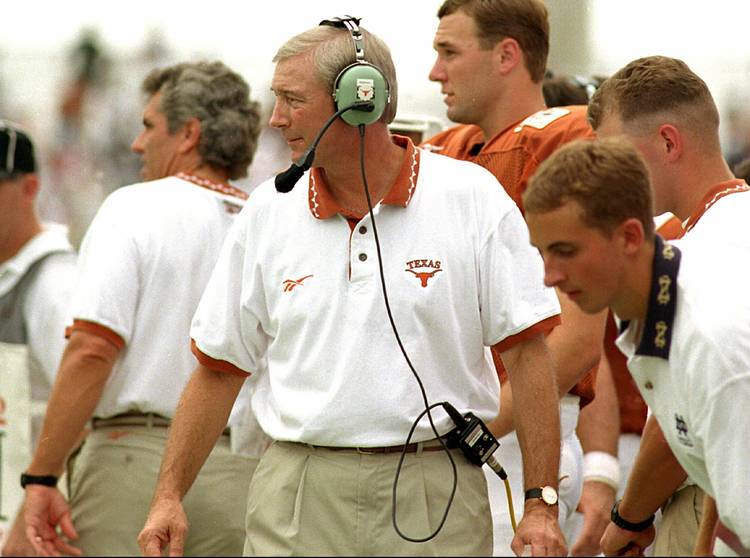 Former Texas coach John Mackovic paces the sidelines during a 1996 loss to No. 9 Notre Dame.

Former Texas coach John Mackovic said if there was one piece of advice he’d offer Charlie Strong, it would be simple.

“And this too shall pass,” Mackovic said during an interview on 104.9 The Horn on Monday morning.

Mackovic, who compiled a 41-28-2 record in six seasons from 1992-97, said he did not know Strong personally. But he admired Strong from afar when the current UT coach was at Louisville.

“The other thing that’s important to understand, when you start on a  journey — and this is a journey, not a destination — you pack everything you think you need,” Mackovic said. “And you aren’t one day into the journey when you realize, ‘Oops, we forgot to pack such-and-such.’ We overpacked with something else. we need to make some changes.

“And I think Charlie Strong will look throughout the year on a regular basis and especially at the end of the season and say, ‘OK, we need to make some adjustments to what we believed was the case when we came here.’ I believe he’s a good enough coach to do that, and he will do that.”

Asked about the size of the UT coaching job, Mackovic said, “Well, I think it’s special. You have a respect from all of your fraternity of coaches around the country. If you’re the coach at the University of Texas, you’re held in a little different esteem. First of all, they respect that it is a big job, and they respect if you’ve been picked to coach there, you must have something going for you.”

“I thought when he was hired, he was a good candidate to come here and continue what’s going on,” Mackovic continued. “Things aren’t going so well right now. And (radio host Bob Cole) said, ‘What do you tell him?’ I would say to him five words: And this too shall pass. And it will. It will.

“Now, then Bob said, ‘Yeah, but do you think the fans will give him enough time?,’” the former coach added. “I said, ‘Maybe not as much as Rice would.’ It is tough. It’s a tough business. It’s tough even when you’re good and you’re loaded.”