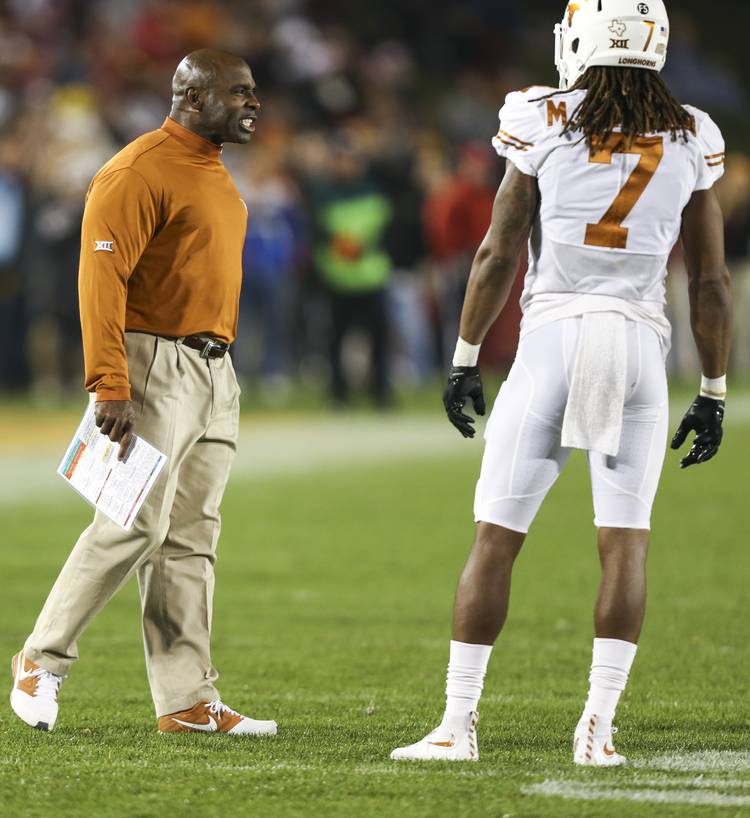 The number of questions over the 30 minutes he fielded directly about Saturday’s game against the Kansas Jayhawks? Zero.

The number of questions Strong got about his team’s confidence level, Jerrod Heard’s shortcomings as a passer, his team’s mental softness, whether Jeff Traylor deserves a shot at calling plays over Jay Norvell, the definition of an embarrassing loss and his team’s Jekyll and Hyde personality?

That’s what happens after you lose 24-0 to Iowa State.

“It was a frustrating loss,” Strong began his presser by saying, “and I know the players are just as frustrated as I am. There’s more than enough talent on this team to win, that’s not the question at all.”

Embarrassing? Up for debate.

When he was asked whether he had identified anything from the coaching level to make sure his Texas team is ready to play at “an acceptable, non-embarrassing level,” Strong answered:

“I don’t think they were embarrassed on Saturday. The guys played hard. This team didn’t go out there and quit. They played hard.”

For the record, “embarrassment” is defined as “a feeling of self-consciousness, shame, or awkwardness.” For football purposes, let’s try this:

OK, on to Monday’s presser …

On whether it’s time for Jeff Traylor to have a shot calling plays: “It’s not so much the play-caller, it’s about executing the call.”

On Heard’s struggles as a passer: “The key thing with that is just pocket presence. He’s better with bootlegs or sprint passes. Even on Saturday, the protection didn’t break down. He just had to have patience to sit in there. But that clock is running in the quarterback’s head. You’ve just got to wait for guys to come open.”

On his thoughts now about his statement from 2014 that Texas would never lose five games again: “I can make those predictions, but it happens. There’s not much I can do about it. You’ve just gotta keep playing.”

On whether Tyrone Swoopes may reclaim the starting job: “I’m fine with Jerrod. We know this: We see him make plays, we know he’s capable. We’ve just got to put him in position to make those plays. We’re playing both of them right now. I don’t know the number of snaps, who had more. But we’re going to play both those guys.”

On the Longhorns’ confidence, and bowl game possibilities: “We’ve got to make sure they understand there’s still a lot of games to go play. It was frustrating that we lost that one to Iowa State. It’s all about getting it back. You’ve proven you can do it (Oklahoma), so let’s go get it done. That’s what happens when you have a group; you’ve gotta make sure everybody’s on the same page and execute.”

On his team’s mentality: “They’re upset. You come into the locker room after the game, J-Gray’s gonna say something. Sed Flowers, Pete Jinkens, they’re gonna say something. It does upset them. It’s not like they walk in there and say we don’t care. You’re always going to get (other teams’) best because of who we are, and the guys have to understand that.”

On whether the team’s Jekyll and Hyde problem is systemic: “Will I see that team each and every week? That’s the team (the Oklahoma game) we have to see. a team that played with passion and played hard. We’ve got to get that each and every week. That’s called consistency and that’s what we’ve got to have.”

On whether he’s worried the fan base has checked out: “I just hope they don’t. At the end of the day, players need their support and need them to cheer them on. When fans look at the number of losses, a lot of times it’s just human nature — why would I want to go watch them play? But our fans have been unbelievable.”

The Longhorns originally were 31 1/2-point favorites over the Jayhawks. That line has dipped now to 25 or 26.