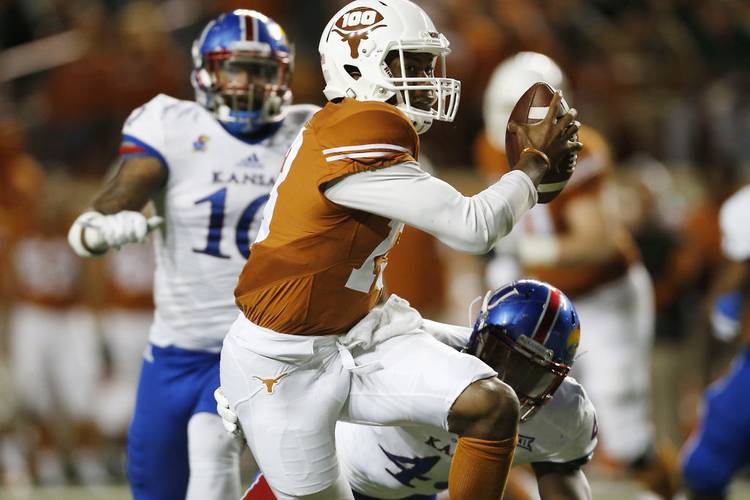 Jerrod Heard already has win versus Kansas as a starting quarterback. He lead the Longhorns to a 23-9 defeat in 2015. (Rodolfo Gonzalez/American-Statesman)

But it could just as easily be 24-17. Kansas’ last-second field goal attempt to close the first half doinked off the goal post.

And it also could just as easily be tied, 24-24. A Jayhawks touchdown was taken away after KU’s Ben Johnson pounced on De’Andre Mann’s fourth-and-goal fumble into the endzone. But the rulebook says only the ball carrier can recover his own fumble on fourth down.

Malik Jefferson missed most of the first half due to illness, but did play on KU’s final drive.

Texas has gotten a pair of 1-yard TD runs from Tyrone Swoopes, and Nick Rose hit a 29-yard field goal.

Kansas quarterback Ryan Willis is 13 of 24 for 158 yards, with a TD and an interception — that was by Dylan Haines, who returned it to KU’s 4 and helped set up Swoopes’ first score. Two other Horns — Davante Davis and Holton Hill — dropped interceptions inside the 5 and in the endzone, respectively, on a drive that ended up with a KU touchdown.

Texas will get the ball to start the second half. The Longhorns are 9-1 under Charlie Strong when they score first, and are 8-2 when they lead at halftime.

Follow live: Texas ready to chalk it up with Kansas