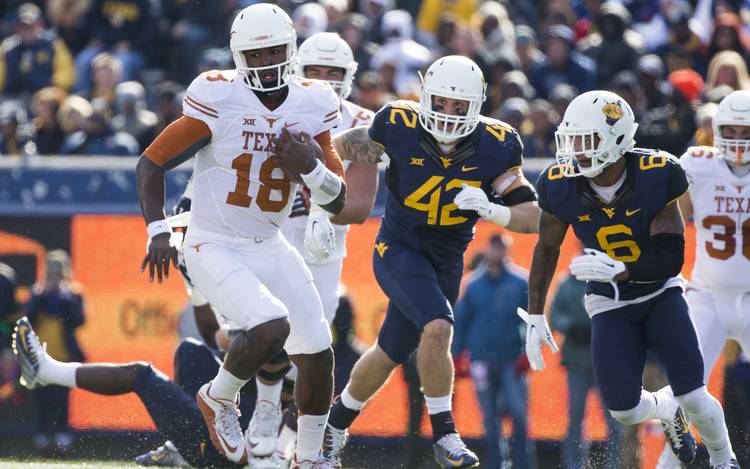 Texas Longhorns (18) Tyrone Swoopes looks for room in the first half of the game against West Virginia on Saturday, Nov. 14, 2015 (RICARDO B. BRAZZIELL / AMERICAN-STATESMAN)

MORGANTOWN, W.VA. — The Texas Longhorns started well but got careless, costing them the lead at West Virginia. The Horns are trailing 21-10 but there is plenty of football remaining.
Here are some thoughts from the first half.

After Davante Davis picked off Skyler Howard, Nick Rose’s 31-yard field goal gave Texas a 3-0 lead in the first quarter. It was Texas’ first lead in a true road game for the first time since they led 13-0 at Oklahoma State last season.

Texas came out with better intensity than we’ve seen away from DKR but the defense was shredded for 131 yards in the first half — 105 by Wendell Smallwood — which set things up nicely for Howard, who closed the half with a 53-yard TD throw to Jovan Durante.
The Horns are getting gashed up the middle. The Mountaineers have played ahead of chains for most of the half and Howard is enjoying good protection.

D’Onta Foreman already has 103 yards on 10 carries with a 65-yard TD. He is making a real run at becoming an All-Big 12 player with his fourth 100-yard rushing performance. Coach Charlie Strong loves the leadership of Johnathan Gray but it’s obvious that Foreman has more juice.
If Texas has a shot at winning this game, it will be with Foreman getting extended carries.

Penalties are a killer

Texas was penalized five times for 39 yards in the first half, the biggest coming on Jerrod Heard’s 29-yard touchdown that was nullified by a holding penalty on left tackle Connor Williams. Strong was all over the refs after that call but the damage was done.

The Horns just haven’t figure out how to win in hostile environments. I picked West Virginia in a close game and nothing has happened to cause me to rethink that position. Texas will have to play much better in the second half to keep from getting blown out again in a true road game.

Texas came into the game with a turnover ratio of plus-9, which is excellent at any level of football. Those numbers, which were tied for 12th in the nation, were quickly diminished in two quarters today as a pair of fumbles led to 14 West Virginia points.

Texas just isn’t explosive enough to give away possessions, especially on the road where it’s problems over the last couple of seasons are well documented.